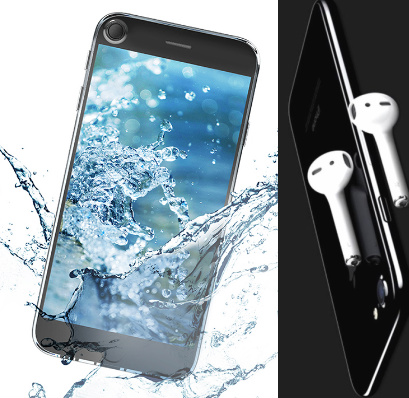 The NEW iPhone 7 will not have a traditional headphone socket.

Apple said its lightning connector could be used instead, which would make room for other components. It will also promote the use of wireless earphones, and has released a set of its own called Airpods.

The firm said it had taken “courage” to take the step.

However, it risks annoying users who will now require an adapter for existing headphones.

The US company unveiled its latest handsets at an event in San Francisco following a year in which its phone sales and market share shrank.

Other new features include:

*the home button can now detect how firmly it is being pressed and provide vibration-based feedback, but no longer moves into the phones

*the handsets can be submerged in water up to depths of 1m (3.2ft) for 30 minutes at a time

*the larger iPhone 7 Plus model gets a two-lens camera on its rear, allowing it to offer a choice of focal lengths

The launch comes a week after the European Commission demanded Apple pay up to €13bn (£11bn) in back taxes to Ireland – a ruling the firm is appealing.

“The current difficulties with the EU will have little bearing towards the iPhone 7 at this juncture,” predicted Ben Wood from the CCS Insight consultancy.

“But the dispute will drag on for years, and if sentiment turns against Apple that could have major implications for the brand.

“For now, there’s a strong argument that the iPhone 7 is more than an iterative update.

“Upgrades are all important to Apple and for consumers coming from an iPhone 5S or iPhone 6, the iPhone 7 will feel like a considerable step up.”

The 3.5mm headphone jack was made popular by Sony’s Walkman cassette players, but was first introduced in one of the Japanese company’s transistor radios in 1964, reports the BBC.

Apple has repeatedly been willing to ditch connectors and other ageing tech from its products earlier than its rivals.

However, it was not first in this case.

“These manufactures have had little adverse reaction, in part, because they sell many fewer smartphones than Apple.”

One audio expert also had doubts.

“If you’ve been interested purely in the audio quality then a wired connection has always been best,” said Simon Lucas, editor of What Hi-fi magazine.

“You have greater stability – there’s no possibility of drop-outs. Wireless headphones also need to be charged, and the louder you listen to them the quicker they will run out of power.

“With regards to headphones with a lightning connector, there’s only about eight pairs currently available and they will all have had to pay Apple a licence to use its proprietary connector.”

Apple, however, suggests there are advantages to using its Airpods, which will cost £159.

It demonstrated that the wireless headphones could be paired with the phone much more quickly than is normally the case with Bluetooth sets.

The Airpods also contain infrared sensors to detect when they are in the user’s ears. This allows them to automatically stop music when they are taken out.

Motion sensors in the buds also allow the firm’s virtual assistant Siri to be activated for voice commands by double-tapping their sides.

Users will, however, have to get used to charging another device.

Apple said the Airpods would last “up to five hours” on a charge, and come with a recharging case that can extend their life up to 24 hours before a plug socket is required.

Another related change is the introduction of stereo speakers – one at each end of the handset – which Apple said meant the iPhone 7 could deliver twice the volume of the iPhone 6S.

Tyga Signed On To Kanye West’s Record Label! Dating A Kardashian/Jenner Paid Off After All
Woman Steals Younger Sister’s Baby In Ebonyi, Abandons Her At Powerline In Aba Abia State