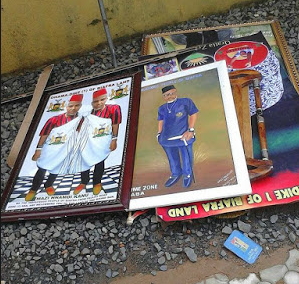 September 27, 2017-  IPOB: Kanu’s Lawyers Sue Buratai, Claim Soldiers Who Kidnapped Him, Should Bring Him To Court For Trial

IPOB: Nigerian Soldiers Who Kidnapped Kanu’ Should Bring Him To Court For Trial – Lawyers Say In New Lawsuit

IPOB Leader Nnamdi Kanu through his lawyers has asked a Federal High Court in Abuja for an order of Habeas Corpus ad subjiciendum, commanding the Chief of Army Staff (COAS), Tukur Buratai to produce him in court.

The request is contained in a suit filed in his name yesterday by some lawyers led by Ifeanyi Ejiofor. The suit is marked; FHC/ABJ/CS/908/2017.

Part of the grounds stated for the request include that Kanu has not been seen since some soldiers allegedly invaded his house on September 14, during which shots were fired and people dead and some wounded.

The plaintiff stated that Kanu, who was in the house during this bloody onslaught by the Soldiers, has not been heard from or seen after this bloody attack in his home by the agents of the respondent (COAS) since the 14th day of September 2017.

“The invading soldiers in their desperate bid to ensure that the applicant (Kanu) is caught in the attack climbed stairs to his bedroom upstairs to shot him; walls of his bedroom were riddled with bullets.

“The invading s,oldiers who had direct contact with the applicant on this fateful day (14th day of September 2017) should be in a position to produce the Applicant before the court. It is either the Respondent’s rampaging Soldiers abducted the Applicant during this raid or must have killed him in the process.

“Section 40 of the Federal High Court Act empowers this court to order that a writ of habeas corpus ad subjiciendum be issued on the respondent, to produce the applicant in Court, particularly now that his substantive criminal trial is coming up on the 17th day of October, 2017.

The plaintiff stated, in a supporting affidavit, gave details of what allegedly occurred during the attack on Kanu’s residence and the circumstances leading to his purported disappearance.

A lawyer, Mandela Umegborogu, said he learnt from Kanu’s younger brother, Emmanueal “that the soldiers who also drove in a purpose-built sophisticated armored personnel carrier, fired live bullets on the relatives of the Applicant, leaving scores brutally wounded, and arrested many.

“During the bloody attack/invasion of the applicant’s home, scores were killed and others forced to abandon their sleep and run for cover in nearby bushes, which include nursing mothers, pregnant women, children and the aged.

“On that same day, the 12th day of September, 2017, dozens of supporters of the Applicant who were on a courtesy visit to him, were also barricaded at Isialangwa and tortured on the same day.

“The applicant was emotionally traumatized and visibly tortured on account of heavy causalities recorded in this unprovoked attack from the invading Soldiers.

“On the 14th day of September, 2017, the Nigerian soldiers invaded the applicant’s home for the second time, unfortunately on a brutal but murderous raid that left 28 persons dead, and over 48 arrested and taken away to an unknown destination.

“The applicant was sitting right inside his bedroom when the Soldiers invaded his home. The soldiers in their desperate efforts to ensure that the applicant who is their main target is gunned down, climbed the stairs to his bedroom upstairs to shot him.

“The wall of the applicant’s bedroom is riddled with bullets holes till date. Attached and marked as Exhibits EK1, EK2, EK3, EK4, EK5 EK6, EK7 and EK8 are photographs showing with sufficient clarity the impacts of this assault on the Applicant’s home.

“The rampaging Soldiers busted into the room of the Applicant in the course of this bloody attack and shoot at everything on sight, including living objects. Attached and variously marked Exhibits EK9, EK10, EK11, EK12, EK13 and EK14, are the photographs and video footage evidencing this dastardly attack on the home of the applicant, including the bullets holes in his bedroom.

“The Respondent and his agents are fully aware that the applicant will return to court on the 17th of October 2017 to stand for his trial in the case above mentioned.

“The applicant has never been invited by any security Agency to response to any criminal allegation before this unprovoked bloody assault in his home.

“The murderous raid in the home of the Applicant is targeted at eliminating him and not to arrest him.

“If the intention of the Respondent was to arrest the Applicant, they would have quietly done that without killing unarmed and defenseless civilian populace found in the Applicant’s house.

“The applicant and the members of IPOB are non-violent and unarmed group, agitating for their right to self-determination. IPOB do not carry arms neither are they into any form of armed struggle, and do not have history of violence.”