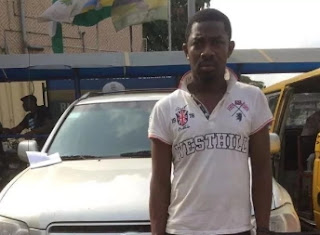 The suspect who resides in Sango Ota, was said to have abducted the two children on September 15, 2017 and took them to unknown place where he started heckling the parents of the children to pay the sum of N150,000 per child as ransom for their freedom.

The Police Public Relations Officer, Abimbola Oyeyemi, who made this known to The Nation in a statement, stated that the case was reported at the Agbara Division where Detectives were detailed to trail the suspect.

Abimbola noted that upon Technical investigation conducted at the hideout of the suspect in a hotel at the Ojoo area of Ibadan and subsequent swoop on the area by the Police, led to the arrest of the suspect and rescue of victims unhurt.

The Police Image maker in the state added that the Commissioner of Police, Ahmed Iliyasu has directed that the case be transferred to the Anti-kidnapping/Cultist Unit of the Criminal Investigation and Intelligence Department (CIID) while the children have been re-united with their parents.

He appealed to members of the public to take security of their children serious to avoid their being victims of kidnappers.

IPOB: Nigerian Soldiers Who Kidnapped Kanu’ Should Bring Him To Court For Trial – Lawyers
Trader Accuses SARS Investigative Police Officer Of Demanding For Sex For Her Release From Custody