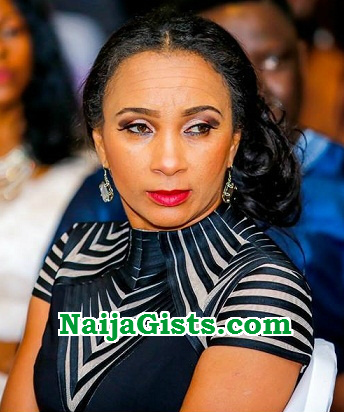 Born to a Nigerian father from Okrika and an Irish mother, pretty, charming and glamor­ous, Ibinabo Fiberesima, seems to relish controversy. A few years ago, she wagged not a few tongues when she emerged as the first Nigerian actress to put on a bikini in a movie. Despite the dust raised by her action, to her, featuring in camouflage clad only in bikini was fun.

After graduating from the Uni­versity of Ibadan in 1994, Ibina­bo, second child in a family of six, never in a day worked with her degree. She went straight into show business, opening and operating ‘The Pyramid Night­club’ in Lagos. The nightclub was a parting gift from her lover of six years.

“I got the night club the month I came out of school, so I just started doing business. I pre­ferred a nightclub because I am a karaoke freak, I love karaoke; I love to sing,” she said.

Having tasted the world of showbiz, there was no going back for Ibinabo. In 1997, she launched into entertainment by contesting and emerged as winner of the Miss Wonderland beauty pageant. The same year, she also contested and became the first runner-up in Miss Nigeria, and in 1998, second runner-up in Most Beautiful Girl In Nigeria (MBGN).

A few years later, Ibinabo stumbled into acting, starring in a blockbuster movie, Most Wanted, alongside experienced actresses like Regina Askia Williams and Ayo Adesanya. But, after a couple of roles, she disappeared from the scene – to marry and have children.

Besides being an actor, Ib­inabo is also a film producer (A Night In The Philippines) and organiser of Miss Earth, Miss International and Miss Intercon­tinental beauty pageants.

For about a decade, Amata was married to popular TV presenter, Agatha and both had two children together before their marriage collapsed. Although Ibinabo claimed her relationship with Amata started after he separated from his wife, the finger was still pointed at her for the crash of the marriage.

However, with her final decision to settle down, Ibinabo on December 18, 2014 married her university sweetheart, US-based Uche Benjamin Ugbuka, at a traditional wedding ceremony held in Okrika, Rivers State. The glamorous white wedding took place two days after.

In November 2012, Ibinabo emerged as the president of Actors Guild of Nigeria (AGN) after a controversial election that pitched her against ace actor, Emeka Ike. Till today, both actors are engaged in a bitter court battle to validate their different factions of the guild.

While giving her stewardship more than a year of presiding over a rancorous and divided AGN, Ibinabo admitted that she took over the leader­ship of the guild with enormous challenges and controversies but had been able to revamp it. “As much as we were faced with great challenges, I have never been deterred from moving the guild forward within the period in office,” she stressed. However, many would not forgive the actress for dragging the AGN into partisan politics and using its platform to campaign for the re-election of former President Goodluck Jonathan.

In 2005, Ibinabo was involved in a car crash that claimed the life of Dr. Suraj Giwa, a med­ical staffer of Lagos General Hospital. It was an accident too many. This singular accident is now threatening to change the course of her life permanently.

Following the accident, Ibinabo has been to court many times and has been handed a jail sentence.

Justice Deborah Oluwayemi of a Lagos High Court sentenced the embattled actress to five years imprisonment for dangerous and reckless driving on the Lekki-Epe Expressway, Lagos, which resulted in the death of Giwa. On February 11, the Court of Appeal, Lagos Divi­sion, dismissed an appeal she filed challenging the judgement of the lower court. Throughout the court proceeding, Ibinabo was visibly apprehen­sive and burst into tears immediately the judgment was delivered.

However, fighting the battle of her life, the ac­tress has asked the court to grant her bail pending her appeal at the Supreme Court. But the court turned down her application for bail last Thursday.