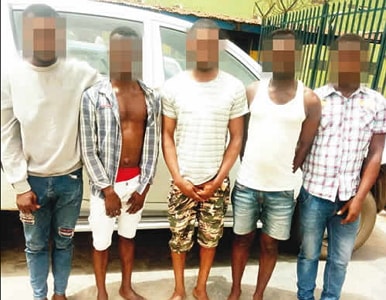 According to a  witness, the Hisbah guards, during a routine operation, stormed an event centre located on the Ahmadu Bello Way, and a compound at Sabuwar-Gandu quarters in the Kano metropolis, where they apprehended the suspected gays.

It was also gathered that the organisers of the party were new graduates from the Bayero University Kano, and planned the party to celebrate their graduation from the institution but were nabbed before the commencement of the planned party.

Each of the homosexuals were said to have invited their same-sex partners to the party.

Hisbah Board, Deputy Commander-General, Special Duties, Shehu Is’haq, who confirmed the arrest of the suspected same-sex party organisers, said 15 of them were already in their custody.

“Islam is opposed to same-sex partners, which is a taboo. As an institution, our responsibility is to correct youths, who are going astray, remind them that devout Muslims should forbid homosexual acts, which will not be tolerated.’’

Of the over 50 gays at the scene, no fewer than 25 of them fled, during the operation, which was based on intelligence gathered by Hisbah operatives.

According to him, the suspects arrested by Hisbah operatives were currently undergoing reorientation.