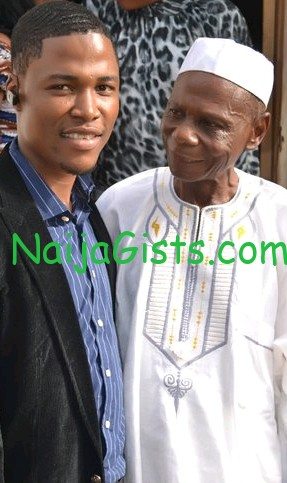 His story  runs like a novel; shocking and unbelievable. But it is real and never imagined. Winner of the maiden edition of Destiny Child Gospel reality TV show, Israel Osunsanmi recently came to term with the saying that blood is thicker than water.

This is so, because on a day the world gathered to celebrate him as the star winner of the gospel reality show, the unexpected happened. Young Israel had a cause to meet his biological father  for the first time in his lifetime while on stage.

Until the grand finale of the reality show, 30 year-old Israel has never had any contact with his father. But on that fateful day, the man who sent his  mother packing while she was two months pregnant   suddenly emerged to share in his joy.

Narrating his ordeal to Showtime, Israel, an OND Business Administration graduate of the Osun State Polytechnic, declared that he has since forgiven his father, even though his  mother’s ordeal really affected his growing up. “I have forgiven him and the relationship  is gradually picking up,” he said.

According to him, his ordeal started when his father impregnated his mother’s best friend a month before their wedding. His mother’s attempt to confront his father got her a knock on the head, as the latter consequently threw her with her two-months pregnancy out of  his house in order to marry her friend.

Israel disclosed that if not for God’s mercies, he wouldn’t have made it  to this world as his mum attempted about 10 times to abort the pregnancy but without any success.

He narrates, “I will be 30 this month. I’m from a polygamous family, and I’m the only child of my mother. I took to gospel music because of my story. My life is a big story. My dad sent my mother packing when she was 2-months pregnant. That was when my struggles started  in life. It was myself and my mum alone in the world. But I’m alive today. That alone gave me the inspiration that it was God that kept me alive.

And it is God, I must live without blemish, and if I do anything wrong, God is going to take away this life that he has given to me. That’s why I can’t do anything without God. And this is why many people today call me ‘ Church Boy’ because I’m always spending my time in the Church. There was a time, I wanted to go astray, when I was singing in clubs, and other hangouts, but God in his infinite mercies  redirected my steps.”

Narrating how he was able to reunite with his father. he disclosed that one of his father’s  sisters made it possible.  “We got hooked up on facebook early last year. In the cause of our  discussion, I  invited her to the grand finale of the show. Fortunately,  she decided to attend the event in the company of his father. She was trying to connect with the Osunsanmis online.

She saw my telephone number and immediately gave  me a call.  That was how we started getting closer. When it was a week to the finals of the reality show, I  invited her to represent my family. But she told me she was going to attend the event in the company of my father. I welcomed the idea. That was it.  The mistake I made was telling  the producer that my dad was around and that, I was meeting him for the first time in my life. Overwhelmed by that news, the Producer invited him on stage and the reunion was a memorable experience.”

Israel, who won N3 million star prize, including a brand new Hyundai car said,  he would forever remain grateful to God for this turn around in his life. “My mother is based in Ilorin and could not make to the grand finale of the show,” he said.

Now married, Israel will be 30 next month. Before he participated in the competition, he  was the  Head, Directorate of Media and Logistics, at TREM in Abuja.

The show producer, Mrs. Uche Esharetury disclosed, she was inspired to do this project because of her passion for gospel music. “Looking at the Nigerian music industry, we realise most of these artistes discovered their talent from the church, participating in choirs and others right from their youth. They were certified as gifted musicians, but the absence of potential sponsorship deprived them opportunities in gospel music.Hence, the subscription to secular music which attracts sponsorship based on its so-cietal acceptance”, Esharetury said. [Vanguard]