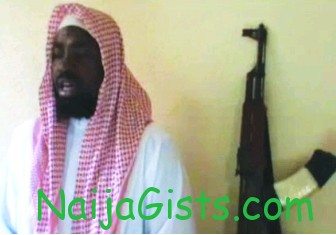 Security agencies have discovered that the spiritual leader of the Boko Haram Islamic sect, Abubakar Shekau, who was wounded in a gun duel between soldiers of the Joint Task Force and members of his sect early this year, is hiding in Gao, a city in Northern Mali, receiving treatment from the Tuareg rebels.

Military Intelligence sources told Saturday Tribune on Friday that Shekau was ferried to Mali through porous routes in the vast Nigerian border with a neighbouring country in the north.

The source cited the discovery of Shekau’s hideout and the training base for Boko Haram sect members to unleash terror on Nigerians as a further justification of the action of the Federal Government to deploy 1,200 troops as well as Airforce fighter and transport aircraft to Mali to help flush out the Tuareg militants and their sponsors.

Shekau was said to have been shot at a checkpoint while he attempted to deceive operatives of the JTF by posing as a nomadic Fulani man who was returning from a journey.

A gunfight ensued when the vehicle carrying him and members of the sect approached a checkpoint and they discovered that the soldiers were waiting for him.

During the exchange of fire, Shekau and two other sect members with him escaped with gunshot wounds, while two other members of the sect were killed on the spot. About six AK-47 rifles were recovered from the vehicle.

The source noted that most of the weapons, including IEDS (Improvised Explosive Devices) recovered from Boko Haram members have been linked to those used during the Libyan uprising against the late Libyan leader, Muammar Gaddafi.

Addressing troops shortly before being airlifted to Mali on Thursday in Kaduna, the Chief of Army Staff, Lt.-General Azubuike Ihejirika, spoke of the need for officers and soldiers of the Nigerian army to be extra-vigilant, as there are indications that some terrorists may have sneaked into the country.

Two Alpha jets, led by newly decorated Air Vice Marshal Tayo Oguntoyinbo, departed the Nnamdi Azikiwe Airport at about 4:25pm on Friday to Niamey, Niger Republic, from where they will launch the attack on the stronghold of the Malian Islamists Tuaregs.

Saturday Tribune gathered that part of the mission of the Nigerian troops deployed to Mali is also to fish out Shekau from his hideout in Gao, where he is currently receiving treatment, and bring him back to Nigeria to face trial for crimes against humanity.