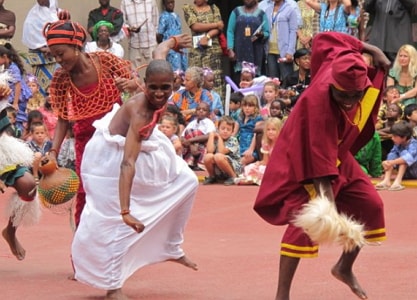 It all began before colonization in Nigeria, they were shipped in their thousands, tied at the ankles one to another with rusted iron chains heavy enough to weigh down an able bodied man. They hadn’t eaten in days,since their capture and sale to slave traders,who paid peanuts in exchange for their lives, lives of humans just like them. With hungry stomach and heavy chains they embarked on a journey that would mar, determine or better their lives, depending on the angle you decide to look at it from.This was the fate of several Nigerians taken into slavery from Nigeria to Brazil decades ago.

Several decades later,in the Brazilian state of Bahia, you need to continually remind yourself that you are not infact in a yoruba state in Nigeria.In Bahia every 2 February and 8 December is dedicated to the celebration and offering of sacrifices to Yemanjá  ( Yemoja,the Yoruba water diety) , Also a favorite meal amongst these set of people is the Acaraje which is very similar to the Akara prepared in Nigeria by the yorubas.

Culture,they say is the total way of life of a people passed down from  generation to generation, the Yoruba culture as practiced in Brazil has stuck vehemently to this saying ( though with a little modifications and adulterations here and there).In a bid to further encourage the culture, the Paramount ruler of the Yoruba kingdom in Nigeria the Ooni of Ife Adeyeye Enitan Ogunwusi Ojaja II  deemed it fit to go to Brazil to commission Bahia as the spiritual capital of all yorubas in America and to present a MOU on the teaching of Yoruba languange in Bahia State school ( amongst other things),which if approved would mean a great deal considering the fact that the study of our native language in Nigerian schools is gradually facing out with greater importance being placed on English language and other foreign languages.

Nigerians brought to Brazil for slavery in the course of their exile understood the importance of culture and decided to uphold their culture, while Nigerians at home since colonization have been doing everything possible to forget their culture, prefering foreign culture over and above their very rich culture from things like clothing,names given to their children, food eaten to mention a few.

Most surprising is taking a walk round streets in Brazil (  not just Bahia), it wouldn’t be difficult to find houses marked ” Ile Orixa” where spiritual consultations are made, similar to that done by Ifa priests in Nigeria, when questioned several of this person’s claim to have learned the “act” from Nigerian Ifa priests who have come to Brazil to teach them. How many of such Ifa training schools do we have in Nigeria?.

The saying that the value of a thing is not known until it is lost applies here. This is further clarified by the recent demand by Nigeria for Artifacts ” purportedly” stolen from Nigeria decades ago by the British government, the value of which Nigeria wouldn’t have known if they were’nt on display in the British museum and admired and loved by others, now the British museum is considering ” loaning” us this artifacts which originally belonged to us.

Do we have to wait till such a time when our culture becomes so extinct to us that we have to go to foreigners to learn  about it? The earlier we realized that our culture is a treasure to be preserved the better for us.

The time to act is now, emphasis should be placed on the learning of our native language, after all China’s lingua franca isn’t  English yet they are one of the most developed countries in the world.The only thing our English has done is win us a place as a country with the largest number of people living in extreme poverty based on a recent report by The World Poverty Clock.

Let’s consider our culture as a tool for tourist attraction hence a medium to generate revenue for the government.

The grass is always green at the other side because people have taken conscious steps to make it so. LETS MAKE OUR GRASS GREENER.

About the author: Bukola Jaiyesimi is a legal practitioner.

Continue Reading
You may also like...
Related Topics:culture, nigerian