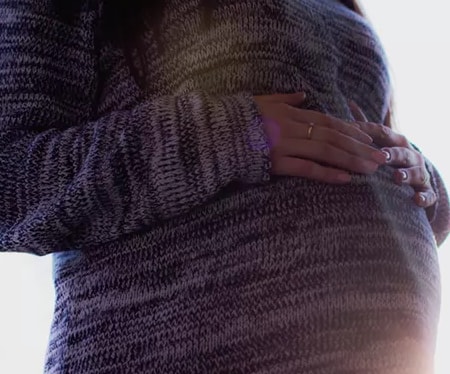 Here is a sensitive question we get not infrequently in the inbox, and this time it comes from a nameless female listener, who simply asks this: “ John, is it a sin to be pregnant before marriage?” How do you go about answering such a sensitive question?

One way to reframe this question would be to ask: Are the effects of sin, sin? But when I thought that, I thought: No.

Even that is not precise enough, is it? Because pregnancy before or outside of a marriage covenant may be owing to a woman’s sin or maybe owing to being sinned against, like rape. Or both. Like, if she engaged willingly and he engaged willingly, they are both sinning. She is being sinned against by a man who should take better care of her, and she is sinning by willingly participating in premarital sex.

But Paul says in 1 Corinthians 6:18, “Flee from sexual immorality” — the old translation says “fornication.” And we know from 1 Corinthians 7:2 he is talking about extramarital sexual relations, because he says, “Because of the temptation to sexual immorality, each man should have his own wife and each woman her own husband.” In other words, sexual relations belong only in the safe, holy, beautiful sanctuary of a marriage covenant between one man, one woman, while they both live.

So, the presence of a child in the womb outside marriage is either the result of being sinned against in rape or the result of sinning. Now, back to that original, reframed question. Assuming that this new mother of this unborn child did sin in having sexual relations outside the marriage covenant, is the presence of this child in her womb sinful? Is pregnancy or the child sin? she asks. The answer is: No. And let me surround that no with three observations to give some seriousness and Christ-centered hope to this mother with an unplanned pregnancy or to whoever else may be listening that way.

First observation: That there would be a stigma that attaches to pregnancy outside of marriage is, I think, a good thing. We have almost entirely lost it today, because of the normalization of sexual immorality and because of putting people’s feelings above a call to holiness. But having said that, it is crucial that every Christian and every church make clear that any stigma to pregnancy outside marriage is because the pregnancy signifies previous sin, not because the pregnancy is sin. And if there has been no previous sin, say, in the case of rape, that should be handled really delicately and tenderly, but not, I think, in the church merely privately. So, I say again, appropriate stigma attaches to a previous sin as its basis and to a present pregnancy only as a possible pointer to that sin. And the reason that is important and hopeful is what follows in my second observation.

The second thing to say is that a woman’s experience of shame should also only attach to the previous sin, not the present pregnancy. One of the reasons for that is because sin can be forgiven, because of Christ. A woman can confess that sin and be cleansed of it so that the shame is overcome and taken away by the merciful cleansing grace of God. If the shame attaches to the pregnancy or the child itself, then there is no overcoming. In other words, the solution to both the stigma and the shame is in the preciousness of the forgiveness of Christ and the forgiveness of a humble community of saved sinners. And all of that assumes that the basis of the stigma and the shame, the basis of both, attaches to the proper place; namely, the previous sin, not the present pregnancy.

So, I hope what our nameless friend feels is that it is wise and good to be serious and sober and honest about the stigma and the shame of the sin of sexual immorality, if that is the case, and that the remedy for that sin and the hope for a life of freedom and joy and peace and usefulness for mother and child and family and everybody affected should not be sought in the minimization of sin, but in the maximization of God’s grace. This grace is very, very great.

Your pregnancy is not a sin. The sin that brought the pregnancy, if it did, is no less forgivable than my sins or the sins of those in your church. Your experience of that forgiveness through repentance and faith in Jesus can become a mighty testimony to the beauty of Christ. And that child can grow up in the beauty of Christ and become great.

“Sex belongs only in the sanctuary of a marriage covenant between one man, one woman, while they both live.”

“No one should feel that, because a child originated in a sinful act, God cannot make this child great. He can.”

“Any stigma to extramarital pregnancy is because it signifies previous sin, not because the pregnancy is sin.”

Toyin Aimakhu Abraham’s Wedding: Publicist Big Sam Media To Walk Actress Down The Aisle
Arab Patient Stabs Filipino Nurse At Hospital In Medina Saudi For Refusing To Give Him Drug Without Prescription