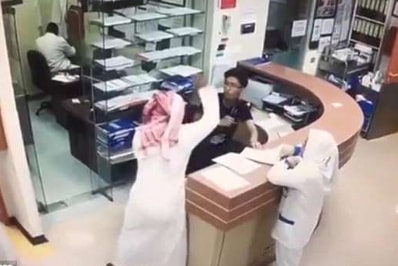 A nurse from the Philippines is currently recovering after being stabbed in the arm by an enraged Arab man over his refusal to give him tabletx without doctor’s prescription.

The 29-year-olc nurse identified as Rolando Mina was filling out paperwork at the reception of a hospital in Medina Saudi last week Thursday the 17th  of May when a 23-year-old suspect approached him and stabbed him on the foreman.

Rolando blocked the knife but the enraged man kept plunging the weapon into his right arm before colleagues came to his rescue.

The Arab man is currently in police custody.

Why It Is Shameful To Be Pregnant Before Marriage
Zambian Woman Divorces Sex Addict Husband, Says He Lasts In Bed For 7 Hours