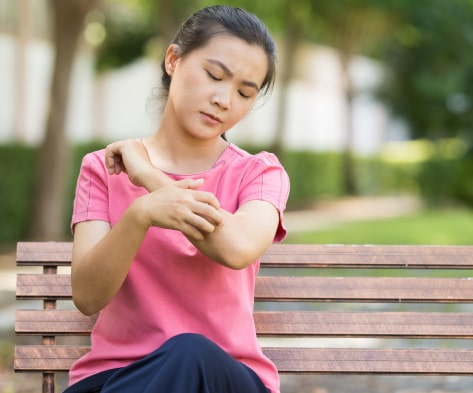 Itching is a desire to scratch and it’s a common skin disorder. In some patients, itching and scratching that follows may be so severe to the extent of driving the victim to mental illness or depression. It may be possible that the sufferer may have frequented various medical practitioners without achieving a solution. The good news however is that very often, the causes of the pruritus can be identified and thus helping the astute clinician to offer treatment.

Let us now take a look at the causes of generalised itching with visible skin rashes in our environment. Chief among the causes would be parasitic infestation/infection like scabies. Scabies is common amongst children. Infestation by scabies produces a rash and intense itching that gets worse at night. Continuous scratching of the affected area can create skin sores that become infected. Areas that are commonly affected by scabies are wrist, elbow, armpit, nipple, penis, waist, buttocks, and the area between the fingers. The rashes, if infected, may start to discharge fluids. Unfortunately, scabies can spread to others, both adult and children.

Fortunately, treatment for scabies and the outcome is very good. However, other members of the family and school contacts should be screened for possible spread of the disease. One other disease, which doctors commonly encounter, is called onchodermatitis. Onchocerciasis, also known as river blindness, is a disease caused by infection with the parasitic worm Onchocerca volvulus. Symptoms include severe itching. It causes blindness. Prevention is by avoiding being bitten by flies. This may include the use of insect repellent and proper clothing. Other efforts include those to decrease the fly population by spraying insecticides.

Body lice are common in poor hygiene in overcrowded places and amongst school children. Like scabies, they spread very easily to others and to family members. Cure is thorough personal hygiene and burning of affected linens. Gut worms could also cause generalized itching. Simply deworm your family every three months.

Other forms of infection agents are fungus/yeasts that cause various skin illnesses. In my practice, I have seen a skin disease that patients frequently bring to my attention: it’s called Pityriases rosea. This is best dealt with by a doctor knowledgeable with the disease. It’s believed this is caused by a virus. The habit of some individuals may cause severe generalised itching in them. Example of this is the habit of vigorous toweling after shower/bath. Drug reaction is another common cause of itching. Any drug that the taker reacts badly to may lead to itching. Chloroquine and camoquine, which are used for treating malaria, are leading causes of severe scratching in our environment. The solution to this problem is to take the antidote (such as piriton) along with the medication at the same time, in the event that itching develops.

Yet, in some individuals, severe itching can arise because of contact with chemicals (in factory workers, soaps, cosmetics, garden or farm plants and clothing). The best approach is to avoid contact with these items or wear protective items like gloves. When the itching has developed, the clinician will assess the cause and deal with it accordingly. Very often, an antidote will be offered. Some individuals may also be reacting to miscellaneous factors, such as food, changes in temperature, exercise and dry skin. I have also seen some patients with generalised itching as a result of use of cold water, hot water in contact with the skin or been beaten by rain water. Rashes may also accompany these reactions. Innocent as it may first appear pregnancy may cause generalised itching due largely to changes in the hormones in the pregnant woman.

Generalised itching may also follow internal diseases. Examples are kidney failure, liver diseases (cirrhosis), cancer of the blood such as multiple myeloma, polycythemia vera), diseases of endocrine (thyroid, diabetes), cancer of the womb, of cervix, cancer of stomach, lung and of the breast.

Psychiatric (mental) illnesses and deprivation of emotional upset could also lead to generalised itching. I am fully aware that even for trained clinicians, recognising and managing skin diseases can be challenging not to mention lay members of the public. The message in this articles is that if you feel strange or have itching or you notice rashes, it’s important not to dismiss the symptom of itching. The cause may be more serious than it may first appear to the victim. The attending doctor should investigate thoroughly and deal with it or refer the patient to the appropriate specialist accordingly.

On the other hand, some skin rashes and itching may take a few minutes in the visit to the doctor to be dealt with. The key message is to take skin eruption and scratching very seriously in both children and adult alike. If you have been affected by the content of this article and you require clarification, kindly call the helpline 07087733114 for support.

“ Body lice are common in poor hygiene in overcrowded places and among school children. Like scabies, they spread very easily to others and to family members. Cure is thorough personal hygiene and burning of affected linens. Gut worms could also cause generalised itching. Simply deworm your family every three months “