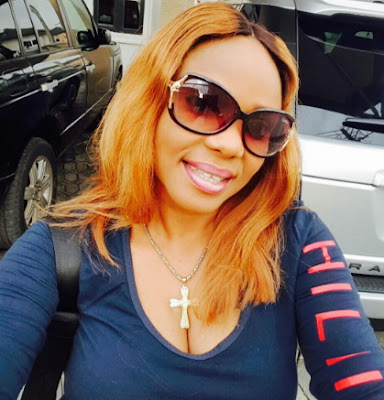 I’m Not Desperate About Marriage, I’m Happy With The Man In My Life Now

When are you going to produce a movie based on your true life story?

I have said to myself that I am going to tell my my story and about my fame. I initially said 40, but I will be that very soon. So, I am not going to say when I am 40 right now because you have to be mentally ready to tell the truth. You are not going to take side with yourself; you have to be honest if you want people to really learn from it.

You had it rough with marriage earlier in life, but you have made the best of it; will you pass this road if a possible again?

I might want to live this same life, but take my time before getting married. Is the story dirty? Not dirty. I won’t say it’s dirty, but it’s something I have to sit and talk about with my children and see if they agree with it, if they allow it because my kids are also going to be involved in it. I need to know if they are ready to accept it.

They have to know if I am going 100 percent or 80 percent. So, it is something that we have to talk about. My story is a lesson for so many mothers out there, so many women who are in marriage, for those who are depressed, who are not getting it right, so many single mothers who don’t even know how to start because I know and I have always been a very strong person. Ever since I was young. I do not accept defeat, I do not accept failure, I fear nobody, but I respect people who I have to respect. That has kept me going.

I can tell you the story of how I had my son. It was so emotional, but not as emotional as when I had my daughter. These are stories that when I tell people they will ask really, how did you survive? So, it’s going to take a whole lot for me to tell the story. I will have to sit down with my family and have a proper discussion with them.

Then, maybe when I am about 45 or 50 I will be able to write the story and tell it, but I pray that I do it before I die. I really need to do it.

Have you ever had to pitch your kids against their father due to experiences from your marriage?

When I was growing up I didn’t know my mother because she had left. I don’t think I have ever told anyone this. I was about nine or 10 years before I knew who my mum was. I didn’t even understand the meaning of mum, even after knowing my mum I still couldn’t relate. I was so much into my dad.

When it happened to me I told myself that I don’t want my children to grow up that way. I want them to grow up having a balanced life. Even though I am going to play the role of a father and a mother to them I still want them to have a dad in their lives.

So that when they sit down and their peers are talking about both parents they can feel good. I don’t want my kids growing up feeling intimidated, not having courage. I said to myself I made the decision to have the first child, I made the de-cision to have the second even though I didn’t want to. It was my decision and it is mine to deal with.

I don’t like when parents especially single mums bring in the hatred or whatever situation they have with their ex-husband or Baby Papa to the kids.

It is not their issue, whatever issue you have with the man deal with it. I have had my Baby Papa calling me to say “I am calling Priscilla, but she is not picking my call” and I ask her why and she says I am fighting with my Daddy. I love it when I see my kids relate with their father. It gives them that sense of belonging that their dad is there.

That way their life is balanced and they don’t feel I don’t have a dad. He has been part of their lives since when they were young.

A lot of people would say that you ought to have remarried since your first marriage ended. Why the delay or have you done it secretly?

I am not going to marry secretly. If I am going to get married the whole world will know. I might not do a big and elaborate wedding, but even if I get married secretly I will still come out in the open and say I am married. I am happy the way I am. The man I am with now is a man who respects me. He also understands what I do.

I am not someone who is against marriage and at the same time I am not into marriage. If I never get married I am an accomplished woman, I am a fulfilled woman. I am happy because I have a man. It is not as if I don’t have a man in my life.

If eventually I get married to somebody else or to him fine. I am a very slow and steady person. In my young age when I got married I rushed into everything and it took me a lot to understand that you don’t rush into life. If marriage comes along tomorrow fine, if it doesn’t come fine, as long as I am happy, good, as long as my kids are doing well, my business is doing well and I am sexy, because a lot of marriages that happened after mine have packed up. I am not desperate at all. In fact, I am not even searching. I have a man that I love and I am contented with.