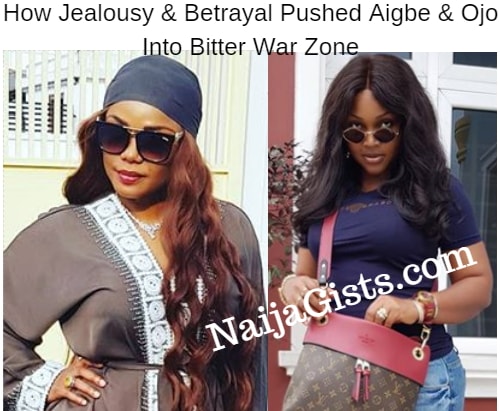 The once rosy relationship between top Nollywood actress Iyabo Ojo and her colleague Mercy Aigbe has hit a dead end.

The two businesswomen who have been competing with each other since mid-last year have stopped talking.

An insider revealed to NG exclusively few hours ago that the two are no longer friends.

The source said the supremacy fight started when Iyabo Ojo who has chain of businesses decided to venture into clothing business when she noticed Mercy Aigbe’s only line of business, Mag Diva’s boutique was doing well.

She reportedly launched her own boutique which is currently not enjoying the patronage Aigbe is getting.

Fast forward to when Aigbe acquired a multi million naira mansion in Magodo few months ago.

The source said Iyabo Ojo who is still living in a rented duplex now see Aigbe from a distance as it seems she can no longer compete with her.

Another point the source raised is the issue of University admission between their daughters.

Michelle Gentry and Priscilla Ojo used to be good friends but when Ojo gained admission to Babcock recently, the two stopped talking.

The cause of Mercy Aigbe and Iyabo Ojo rivalry fight according to the source is jealousy and betrayal.

Nigerian Man Killed By Cultists In Pretoria South Africa After Partying At Night Club
Feminism Is Satanic, It Is Built On Foundation Completely Devoid Of God – Kris Ngozi