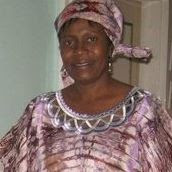 Pictured here is Philomina Chiweshe, an employee of the Joint Admission Matriculation Board in Makurdi area of Benue state who is currently in EFCC custody after she claimed that a spiritual snake invaded the board office in Makurdi and swallowed the N36million kept in a vault.

Philomina claimed that the money the board realised from the sale of JAMB scratch cards was swallowed by a mystery snake.

Later on in the investigation, Philomena allegedly changed the story and said her house girl connived with another woman, Joan Sen to spiritually steal the money from the vault.

A team of auditors have been sent to Benue state to take inventory of the scratch cards sold in different areas of the state and recover the money.