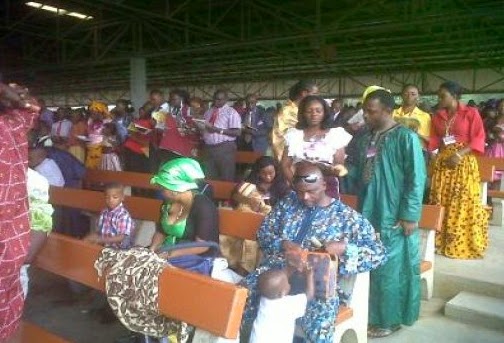 As Nigerians prepare to elect new leaders that will run the affairs of the country in the next four years, members of Jehovah’s Witness have been banned from participating in the electoral process and by implication, they are forbidden from voting for any candidate or contesting in any election.

They claimed that participating in an election was satanic and contrary to God’s commandment.

Findings revealed that members of Jehovah’s Witness were warned not to obtain voter’s cards and that they should not vote during the elections.

The directive was not a mere order as any member found participating or voting during the elections will be excommunicated.

When our reporter spoke to some of the members who confirmed the directive, they claimed that the order was right because they are still waiting for the kingdom of God that is yet to be establshed on earth.

A minister in the congregation, James Uduok, explained that every member of Jehovah’s Witness knows that participating in election is satanic and contrary to the will of God.

Uduok said that the teaching of the Witness was strongly embedded in the Bible and all members must adhere strictly to the teaching or leave the congregation.

The members defended their decision not to vote or get involved in the electoral process by quoting Mathew 6: 9 and Mathew 4: 8.

Mathew 6: 9 says: “This is how you should pray: Our Father in heaven may your holy name be honoured. May your kingdom come.”

To members of Jehovah’s Witness, this scripture implies that the kingdom of God has not come and they are still waiting for it to come.

Also, Mathew 4: 8 is a scripture that dwells on how the devil took Jesus to a high mountain and showed him all the kingdoms of the world and promised to give them to Him if He bowed down and worshipped him. Members of Jehovah’s Witness claim that this world belongs to satan and insist that God’s kingdom has not yet come.

When our reporter sought the views of non members, especially pastors, their response was contrary to the teaching of the Witnesses.

Pastor Jude Chukwurah noted that their belief was strange because the same Bible mandated Christians to respect constituted authority.

“God recognises leadership and authority of leaders in the society,” he said.

Chukwurah said even in ages past, there was clamour for leaders as reported in the Bible and the people elected their leaders.

Another pastor, Michael James, said the Witnesses are misinterpreting the Bible and should be ignored.

He warned that their belief was not consistent with biblical teaching, adding that if such teaching is followed it could lead their members to imbibe false doctrine that could lead them to hell.