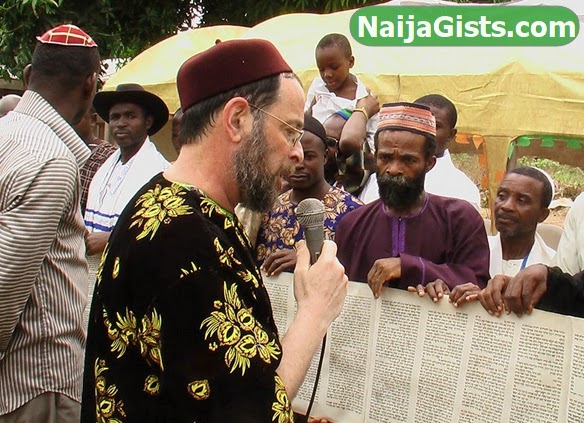 One evening in June, I phoned Elder Pinchas Ogbukaa, spokesman of Abuja’s Gihon Synagogue in Nigeria. It was evening in Rhode Island, but Nigeria is six hours ahead. Even though Pinchas is an early riser, I could tell from his voice that I had woken him.

When I had met Pinchas in Abuja, Nigeria’s federal capital some four months earlier, he had emphasized that one of the biggest difficulties facing the country’s roughly 2,000-3,000 Igbo Jews is their isolation from other Jewish communities around the world. I had been considering that difficulty ever since I returned to Rhode Island.

The Igbo, whose traditional homeland is in South-Eastern Nigeria, is one the country’s largest ethnic group. Most of them are Christians, but many Igbo, even while practising Christianity, consider themselves ethnically Jewish and members of the lost tribes of Israel. In the past few decades, several thousands of Igbo have gone a step further and embraced Jewish practice, which they view as their lost heritage, though so far, only a small number have undergone formal conversion.

Now, waking Pinchas, I suggested that as a step towards breaking their isolation, Abuja’s Igbo Jews choose a representative to come to Rhode Island. He asked to sleep on the matter and then get back to me.

I had already discussed the idea with Rabbi Barry Dolinger of Congregation Beth Sholom and Rabbi Wayne Franklin of Temple Emanu-El -two Providence rabbis interested in fostering a relationship between their synagogues and Abuja’s Igbo Jews as well as with North-Eastern University Professor, William Miles, author of “Jews of Nigeria: An Afro-Judaic Odyssey.”

Rabbi Franklin and Professor Miles had encouraged my February visit to Abuja to celebrate the holiday of Purim (the Festival of Lots) and spend time with the city’s Igbo Jews. I had stayed at the home of Elder Habakkuk Nwafor -head of Abuja’s Tikvat Israel Synagogue – and his family. Pinchas and I spent hours talking about Nigerian Jewry in Habakkuk’s courtyard and while driving to sites around Abuja.

A few days after phoning Pinchas, I received an email. “Shai, my brother, it will be a great honor and immense blessing to have one of us visit and bring our story to Jews in Rhode Island,” Pinchas wrote. “It is a beautiful, brilliant and wonderful idea. The Nigerian Jewish community will be enriched immensely through this awareness in your state.”

Pinchas informed me that Elder Ovadia Agbai, the nearly 70-year-old leader of Gihon, the largest of Abuja’s three Igbo synagogues, would be the one to take the trip to Rhode Island – and that Pinchas would make every effort to join him as well.

Rabbi Dolinger and Rabbi Franklin proposed that the elders come to the United States in September, during the holidays of Sukkot and Simchat Torah, so that they might experience their celebration in Rhode Island.

The rabbis’ proposal appealed to Pinchas and Ovadia, and in September the two elders flew abroad for the first time, leaving Africa’s most populous country with more than 160 million inhabitants for a 12-day visit to the smallest state in the US.

There was a great deal of anticipation in Rhode Island about the elders’ holiday visit, and as word had spread it became difficult as I tried to accommodate all of the invitations from synagogues that wanted them to participate in services and from families who wanted to host them for meals.

When they arrived, Ovadia and Pinchas saw much that was novel and unfamiliar to them. They marveled at the number of rabbis, including young men in their 20s, who lived in Rhode Island. There are no rabbis among the Igbo Jews and it’s been five years since a rabbi from abroad has visited their community in Abuja.

In addition to wondering how they might have some of their own young men come to the United States for rabbinic training, they also wondered how they might provide a Jewish education for children in Abuja similar to that offered at the Providence Hebrew Day School and at the Jewish Community Day School of Rhode Island.

At the same time, there was much that was very familiar. During a tour of Newport’s Touro Synagogue, they learned of the struggles of Newport’s first Jewish residents to establish themselves in 17th and 18th-century Rhode Island, and of the small congregation’s early efforts to obtain a rabbi and house of worship, all of which Ovadia and Pinchas identified with as Igbo Jews.

A particularly moving moment of the elders’ visit took place a couple of days after their arrival, during morning services at Congregation Beth Sholom.

On our way to the synagogue, I asked Pinchas if he would speak during the services, and he said he would be happy to. However, when he stood before the congregation to speak, he fought back tears, and I wondered if he would be able to regain his composure. Afterward, I told him that I had a similar experience when I was asked to speak in front of the members of Tikvat Israel Synagogue in Abuja.

There is something about being half way across the world, among people who look very different and speak a different native tongue — but are praying in the same Hebrew and following the same service — that makes words difficult and tears easy.

Eventually, Pinchas collected himself and told Beth Sholom’s members a little about Igbo Jewry and about how he and Ovadia came to find themselves in Rhode Island. Before concluding his talk, he asked to share one of the Igbo Jewish prayer melodies that are sung during services at Gihon Synagogue. He chose the Hebrew song “Romemu,” whose words translate as “exalt the Lord our God, and let us bow at His holy mountain.”

Pinchas possesses a deep and sonorous voice, and was known as a bit of a crooner in his younger days. The highs and lows of the song took me by surprise. When I escorted him back to his seat, it was evident that many of the people in the synagogue, including Rabbi Dolinger, had been moved to tears by his words and by the melody.

After shaking Pinchas’ hand, one of the congregants, Barry Bessler, said to me, “I have never felt prouder to be a member of Beth Sholom than right now.” He was happy his teenage daughter had been there to hear the talk.

“When Pinchas sang in our synagogue, it brought tears to my eyes,” Rabbi Dolinger later told me. “The sincerity and raw power of his emotion, faith, and struggle was embodied by his voice.

Afsai, author and writer, is based in Providence, Rhode Island, United States.

19 thoughts on “Jewish Igbos Of Nigeria: The Lost Tribe Of Israel By Shai Afsai”