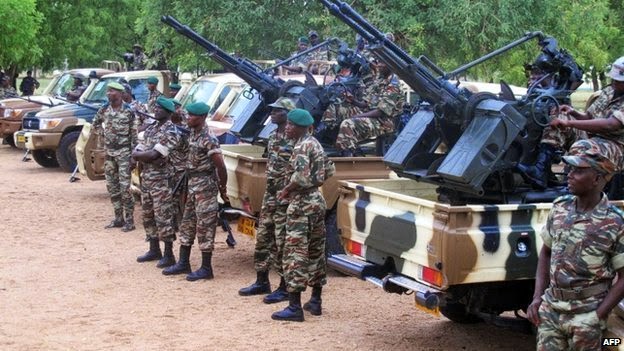 August 26, 2014 – How To Win The Fight Against Boko Haram: As Exposed By “Abubakar Shekau”

The Boko Haram terrorist movement released a latest video to update Nigeria on their current status. In it they claimed the formation of a nonsensical caliphate, plagiarizing from the concurrently running operations of fellow loony ISIS terrorists in Iraq and Syria.

In the 40 minute video released by the usual publicists, only one important message and piece of information was of note: Boko Haram is scared of the Civilian-JTF. The man who spoke in the video, claiming to be Abubakar Shekau – the serially replaced leader figure – sounded several “warnings” to the Civilian-JTF, literally begging them (us as I feel a part of their association with their permission) to leave the terrorists alone. “Shekau” severally threatened to kill us for slaughtering his men in hundreds. He even went as far as describing the process in which the Civilian-JTF professionally screens which of his members to kill. Shekau said: “you ask of them which of them have blood on their hands; which of them have actually killed people and all those who admit to having murdered you humiliate and kill them.”

This is not the first time that in new videos the only enemy and threat “Shekau” warns are the Civilian-JTF. In his video release after the Giwa barrack attacks, Shekau similarly made no mention of the Nigerian army, but only promised fire and brimstone on the Civilian-JTF. In this recent video, “Shekau” said he will kill us whether we continue to kill his men or not, so funny, he said he will “kill us, the Civilian-JTF as a prevention of our later becoming infidels.” Rather desperate, angry and senseless.

In summary, the Nigerian army are Boko Haram’s friends. I do respect them a lot and appreciate the ultimate sacrifice they are making, but the truth is the truth. The Nigerian government has completely succeeded in embezzling all the funds needed to maintain the great army Nigeria is known for. Our troops are sent to battle Boko Haram, ill-equipped, hungry, unmotivated and unsupported. This is why they are deserting the army in hundreds and fleeing to Cameroon when they are close enough to the border. It is not their fault. Why should they die when the executive leadership protects and dines with the politician sponsors of terror? When the Jonathan administration in five years of limitless terror, has not apprehended and punished a single politician terror sponsor? The army chiefs are dancing with president Jonathan as they divert the billions budgeted for security. Boko Haram loves the Nigerian army, whoever watched the latest video will see once again the glee with which the terrorists received new loads of Nigerian ammunition from stores the Nigerian army ran and left behind. Yes, the terrorists easily pick up APC’s, tanks and ammunition from the army. They no longer need to import their “sophisticated” weapons from Libya, they get it freely from the stashes Lt. Gen. Minimah sent to Borno. Shekau literally said, “thanks Minimah” in his latest video.

For now, the only way to defeat Boko Haram is for us people to rise up and PUSH the president of Nigeria to approve the acquisition of arms by civilians, hunters, farmers and community patriots in the affected northeast, so they can continue destroying the cowardly Boko Haram. It is paradoxical, the Nigerian army is afraid of Boko Haram while Boko Haram is afraid of the Civilian-JTF. The Civilian-JTF have the motivation, courage and rightful anger that makes them the only resort Nigeria has to defeating Boko Haram; as well as being masters of the terrain.

The Chibok parents recently made the ultimate sacrifice by deciding and telling Nigeria’s president that they had “performed the burial rites of their daughters,” and now “needed the bodies,” that the President can go ahead and order the invasion of Sambisa and sacrifice any of their daughters he has to in the process of defeating Boko Haram once and for all. With that went the last excuse Nigeria’s President sold for the inability of his sabotaged military to defeat Boko Haram.

Nigeria is desperate. We urgently need to get the last civilian response to end this terror. Will President Jonathan listen to us? Well, I am not counting on it. He is known for dancing when our blood is being “shared.” But as a people, as Boko Haram keeps killing our loved ones and gaining territory, we must do our best and petition the government of Nigeria to act responsibly- and immediately approve and support the proper arming of the available thousands of patriotic Civilian-JTF youth and volunteers from around Nigeria to destroy Boko Haram before Boko Haram destroys us. This pogrom has lasted way too long. It is time to hang these bush rats.

16 thoughts on “How To Win The Fight Against Boko Haram: As Exposed By “Abubakar Shekau””