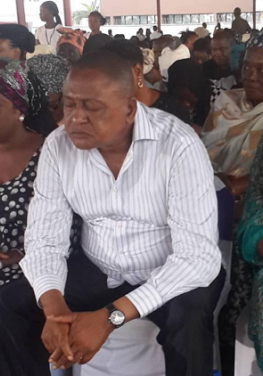 June 13, 2016 – Jide Kosoko Absent From Late Wife, Henrietta Kosoko’s Burial In Abraka Delta State After He Was Warned To Stay Away

Last week, Nollywood lost an Icon, Mrs Henrietta Kosoko to a strange spiritual attack at the age of 53.

Her burial initially scheduled to hold in Lagos was cancelled as the family of the deceased demanded for her corpse.

However when the family of the deceased came for her corpse, they delivered a message to the actor to stay away from his late wife’s relatives in order to avoid trouble. The actor reportedly yielded to their order and stayed back in Lagos.

About 6 Nollywood stars he sent to Abraka to represent him were sent back.

A source close to the veteran actor said Henrietta’s family members didn’t do the right thing.

“If you want him to pay dowry, why not have him pay it now with interest so he can give the mother of his children a befitting burial. This culture is out of it” – the source added.

This is why our sources didn’t get any photos from the burial.

Everybody that came from Lagos with the exception of close family members were not permitted to witness Henrietta’s final burial.