Linda Ikeji has found herself in the fiery nest of Nollywood actor Jim Iyke following a photo of him she shared with her followers. naijagists.com

On January 19, 2013 the former model shared a sexy photo of Jim Iyke with the caption “‘Every time I write about this dude he comes after me on Twitter, but I must do my job na…lol. Nice body’

The koko of the matter is that Jim Iyke got totally pissed off due to some abusive comments the post generated.

As earlier predicted, the actor took to his Twitter page to reply Linda and here is what he said:

It’s m handle and my space. I do wit it wtf I pls. If dat hermophrodite witch LINDA n her lame employees dt like it then hug a transformer!.

It’s #twitter. A social medium 4 constructive interaction. If any1 gets on my space to disrespect me, I’ll return d favour wit dividends. 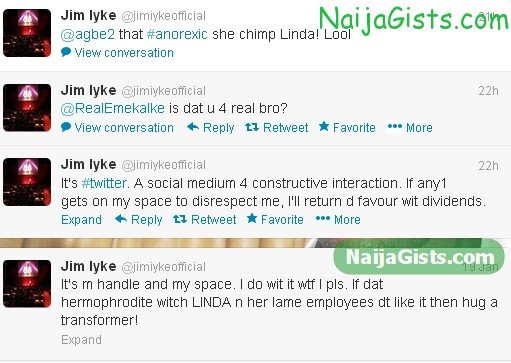 According to a source, most comments on Linda’s blog are posted by anonymous readers, an indication that most of them might be framed up comments by Linda’s employees.

In another development, actor Segun Arinze had to do a lot of image cleansing after several abusive words were hurled at his wife and himself following an article on that same blog.

No vex Jimmy……. she must have learnt her lesson one way or the other.