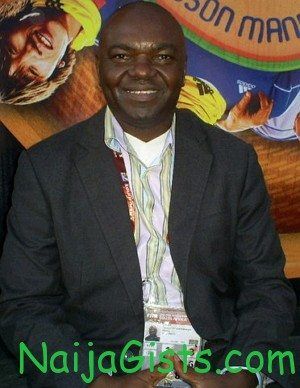 Mr Joe Ighile is dead. He is a veteran sport reporter with Channels TV.

According to insiders, Joe complained of a minor health problem before he was later rushed to the hospital on Friday night where he eventually gave up the ghost.

Joe Ighile‘s sudden death has brought sorrow to some of his fans, family members and colleagues at work.

His co-host, Toyin Ibitoye said she heard about his untimely death on her way to South Africa for the coverage of AFCON 2013 final match between Nigeria and Burkina Faso.

The veteran sport reporter joined Channels TV back in 2003.

Joe Ighile is survived by his two kids and a lovely wife.