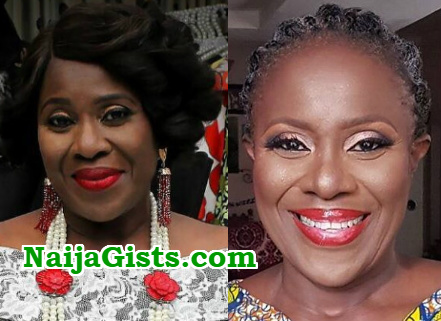 Nollywood actress Joke Silva in a recent interview revealed that her success is not by luck or talent but by grace.

On what contributed to her success, the Nollywood actress said:

“What has helped me in life is grace. So much grace. I believe God empowered me with passion and respect.

I did whatever was possible within the stage of performance, then, stage transited into television and television to film till we ended up with what we now call Nollywood.

I am grateful to God that I am where I am because it is only Him that could have allowed all the hard work to pay off.

Talent is great but it doesn’t guarantee success; a man can run out of luck, but grace? You keep blossoming and that’s what my story is.”

“I always knew it was what I wanted to do, and I think my parents knew too but were skeptical because the industry was hardly recognised then.

I never had doubts about being an actress; that’s why even when the jobs weren’t very forthcoming, I stayed in performance by teaching, stage plays or television. I kept reinventing myself in the same industry because I knew it was my field.

“I was a model child. I had regular run-ins with my parents, but every child has her naughty days. My parents were very accommodating and supportive, so there was really no need to be rebellious.

Thankful for her youthful days, the actress was quick to add what she missed about those days. “I miss being a young lady sometimes when I can’t jump as I used to or expend as much energy as before.

But I’m grateful for my growth. I am gracefully aging and loving it”.

Continue Reading
You may also like...
Related Topics:age, Joke Silva

Antar Laniyan: I’ll Slap Any Nollywood Actress Who Wink At Me On Set
Joselyn Dumas: Why I Quit My Legal Job In The US & Relocated To Ghana