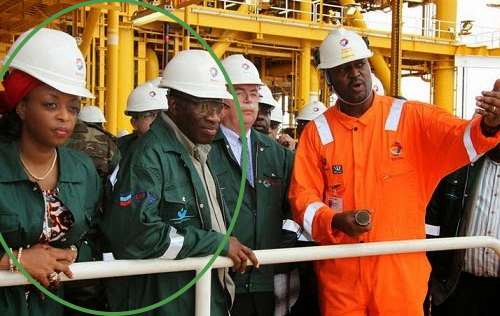 Italian prosecutors have named former President Goodluck Jonathan and Mrs. Diezani Alison-Madueke, who served under his administration as Minister of Petroleum Resources, among those who allegedly received kickbacks in the controversial $1.3bn oil block deal involving oil giants ENI and Royal Dutch Shell.

According to AFP, Italian prosecutors, in court documents filed late last months in Milan, claimed that the Chief Executive of ENI, Claudio Descalzi, and his predecessor, Paolo Scaroni, met Jonathan “in person” to thrash out the deal, which also involved former British intelligence agents working as advisors for Shell.

The prosecutors alleged that Jonathan and Diezani benefitted from a sum of $466m converted into naira and used to grease the palms of some Nigerian government officials to facilitate the alleged shady deal.

The prosecutors alleged that another $54m was withdrawn by one Abubakar Aliyu, whom the prosecutors described as an “agent” of Jonathan.

The beneficiaries of the money went on a shopping spree buying “property, aeroplanes, armoured cars,” prosecutors stated in the court papers.

In the said papers, which AFP claimed to have sighted, the Italian prosecutors alleged that ENI and Shell executives worked with a Nigerian businessman, Dan Etete, who was an “oil minister under the military ruler, Sani Abacha, from 1995 to 1998.”

Etete’s company, Malabu was the alleged “fraudulent holder” of the OPL 245 block, according to the court documents filed by Italian prosecutors.

The prosecutors claimed that after talks in Milan and Abuja, the oil block was bought illegally by the oil majors in contravention of domestic laws, “without competitive tendering” and with “full, unconditional exemption from all national taxes.”

To facilitate the alleged shady deal, a total of $801.5m was allegedly transferred to Etete’s Malabu accounts, out of which $466m was converted into naira and used for greasing the palms of government officials, including Jonathan and Diezani.

However, ENI and Shell have both denied wrongdoing in the transaction.

Shell, in an email to AFP, said, “We are aware of the investigation and we hope to show the prosecutor that there is no basis to prosecute Shell.

“Shell takes this matter seriously and is co-operating with the authorities.”

The Economic and Financial Crimes Commission had also recently pressed charges in connection with the same oil block deal.

Last Friday, the Federal High Court in Lagos ordered three banks to temporary forfeit a sum of $153m, which Diezani allegedly siphoned from the coffers of the Nigerian National Petroleum Corporation.

For his part, Jonathan has denied that his government was corrupt and contested that the claim by his successor, President Muhammadu Buhari, that he left “virtually empty” treasury.