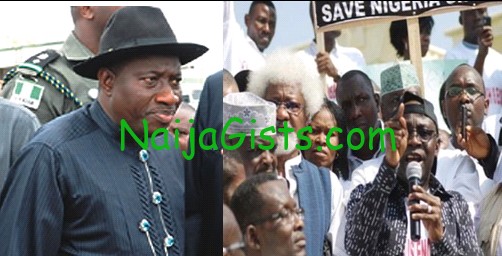 Pastor Tunde Bakare, the General Overseer of the Latter Rain Assembly & a member the Save Nigeria Group today asked President Goodluck Jonathan to quit power honourably or be disgraced out of Aso Rock in a sermon.

Tunde Bakare made the bold pronouncement in a sermon titled “How To Change Government Peacefully And Make Society Better”.

He said he was calling on Jonathan to resign because he is too ill-equipped to rule the country and that the problems of the country have overwhelmed him.

“In spite of the president’s promises to deal with insecurity head-on, this government appears helpless because it cannot see the linkage between corruption and violence,” he said.

Pastor Bakare, who quoted the scriptures copiously, especially books and verses that relate to prophetic revolutions and how God enthroned kings and disgraced out of power those that failed to keep His precepts and rule properly, decried the corruption in the country and warned that the country cannot continue to slide down the precipice.

He said: “the nation has been thrown to the dogs of pervasive corruption and disruptive, perennial insecurity”.

In the speech, which had four major headings: Who Really Rules in the Affairs of Men; The Purpose of Government in a Nation; How to Change Government in a Peaceful Manner; and The Way Forward, he also listed four factors that could lead to change in the leadership of the country in the foreseeable future.

The pastor listed the Unquestionable God Factor, Resignation, Impeachment and the People’s Revolt as some of the options open to Jonathan.

Out of these options, he said the immediate one is resignation which, according to him, “is not a sign of weakness– it is a sign of patriotic truthfulness. It is giving opportunity to those who can do a better job in the interest of a nation to carry on with nation-building where the exiting leader stops.”

Bakare added that there will be change of leadership in the country before 2015, saying there will be a free and fair election before that year.(pm)