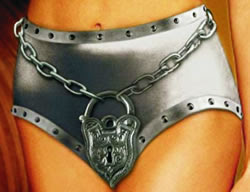 A 38-year old Indian man identified as Sohanial Chouhan recently made a do it yourself chastity belt to prevent his wife from engaging in extramarital affairs.

We learnt Sohanial Chouhan’s brutality was exposed when his wife, Sitabai whom he married at age 16 was rushed to the hospital after attempting to commit suicide with rat poison.

While receiving treatment at the hospital to discharge the poison she took, nurses were amazed to find a padlock in her vagina.

According to Mrs. Sitabai Chouhan, who had been married to Chouhan for 19 years,  in 2008, Chouhan  drugged her and locked her in a room late at night and then proceeded to drill holes with a spiky instrument on either side of her genitals in order to fit a lock to stop her from having sex  with other men while he is at work. Every morning before going to work, Chouhan allegedly inserts a small lock into the hole and keep the keys under his socks.

The Hospital immediately invited the police who tracked down Chouhan and unlock the padlock after retrieving the key from him.

Mrs. Chouhan claimed she  had attempted suicide because her husband got her drunk and tried molesting their eldest daughter.

While his wife recuperates, Chouhan has been charged with cruelty and voluntarily causing grievous hurt.  Police describe Chouhan as a mentally disturbed alcoholic.

Following his arrest, he tried justifying his actions, claiming that he became the custodian of his  wife’s vagina  because,  several women in his family had “strayed” in the past and he did not want his wife to do the same.

The normal chastity belts are made of garments that can be locked to stop the wearer from having sex and not by literally puncturing holes in the genitals for padlocks. When locked, the belt fits very securely to the body, both at the waist and the crotch. The belt has a slit for urinating at the crotch and absolutely nothing,  not even a finger can penetrate far enough for sexual pleasure. However,  it cannot be worn for a long period due to hygiene complications.

According to popular myth,  the chastity belt was used as an anti-temptation device during the Crusades. When the knight left for the Holy Lands on the Crusades fighting the pop’s war, his Lady would wear a chastity belt to preserve her faithfulness to him. However, there is no credible evidence that chastity belts existed before the 15th century and their main period of apparent use falls within the Renaissance rather than the Medieval times.

The couple who resides in Indore, one of the biggest cities in the state of Madhya Pradesh in India has five children. Though the city is known for its architectural splendour and is home to many industries and contributes immensely to the fast growing rate of India’s economy, it is just like every other place in India which was recently classified by a survey carried out by TrustLaw,  as the worst place to be a woman.

The girl child is still seen as inferior and of no financial value to the family. They are still being married off as young as ten, burned as a result of dowry-related disputes, and even sold off as property.(tribune)

OMG this man is wicked !