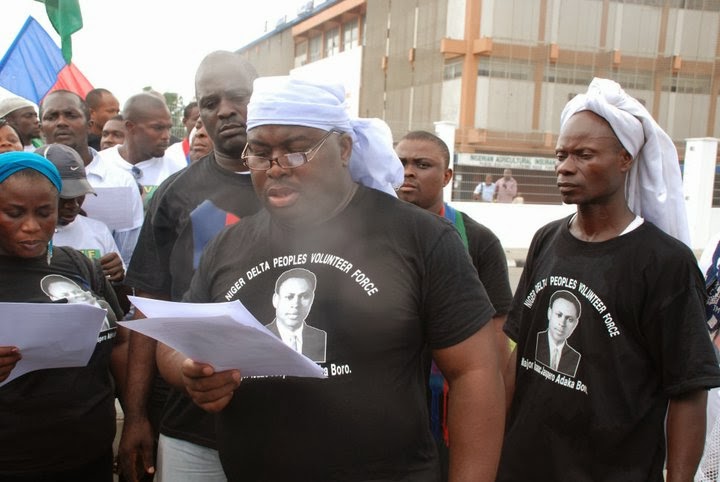 During an emergency meeting that held yesterday in Bayelsa, Asari Dokunbo-led thugs urged Nigerians to either accept President Jonathan by force or there will be massive bloodshed around the country.

The meeting which was held at the Bayelsa State Government Banquet Hall and facilitated by the Special Adviser to the President on Niger Delta Affairs Kingsley Kuku had in attendance erstwhile frontline commanders of the Movement for the Emancipation of the Niger Delta, Ekpemupolo (aka Tompolo), Victor Ebikabowei Ben( Boyloaf), Asari Dobkubo, Pastor Rueben Wilson as well as Eris Paul (aka Ogunboss).

Dokubo, in his remarks, urged the ex- militants present at the meeting to go and purify themselves and prepare for war because the stoning of President Jonathan’s convoy in the North was a call to war.

He said, “Every Niger Delta youth should go and prepare for war. For the past four days, I have not slept well nor have I had a change of clothing. I have not been to my house. This is the time. The Northern youths are trying to know how important you are. After this time, no one will play with us. After 2015, no governor will play with us. We are saying we will fight with everything we have. Ijaw people cannot continue to suffer while other people enjoy.”

Boyloaf, in his speech, said he was ready to take up arms if the North hijacked power from President Jonathan.

According to him, any attempt to forcibly take over power would backfire as the Ijaws would also forcibly take away oil from Nigeria. His words: “They want to use issue of insecurity along the waterways of the Niger Delta to keep us busy. And today, they are intimidating our own (Jonathan). I am Boyloaf. I have retired but not tired. I will go back to the creeks if possible. Whether they like it or not, President Goodluck Jonathan will win. Now that oil is below $50 per barrel, they want to use Boko Haram to take power. If they take power, we will demand for all the years of their benefiting from oil. Nobody can intimidate the Niger Delta. Gone are the days you will intimidate people with the rifle.”

On his own part, Tompolo, who spoke in Ijaw dialect, called on the ex-militant leaders to bury the hatchet and unite to rally support for President Goodluck Jonathan’s re-election bid.

The ex-militant leaders in a joint resolution decided to back Jonathan’s re-election bid with a warning that they would no longer take lightly attacks on President Jonathan’s convoy.

It is only in Nigeria that criminals like Asari threatening Nigerians will be allowed to roam freely on the streets.

It is a pity that our President surrounds himself with a bunch of thugs. No wonder he is under-performing. Evil communication they say corrupt good manners.