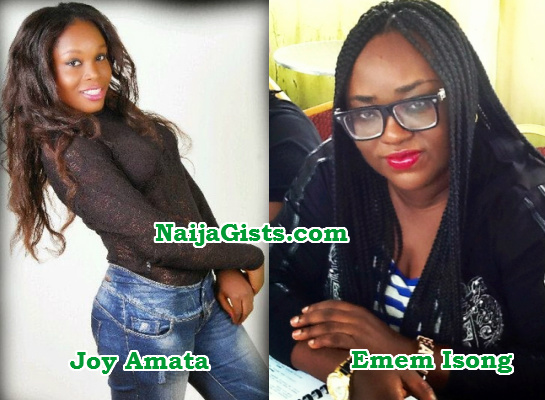 Joy Amata Says Nollywood Actresses Are Sleeping Their Way To Fame, Blasts Emem Isong For Not Using Her Students In Movies

Joy Amata, born and bred in Lagos State, is a rising actress who grew up in the popular slum, Ajegunle.

In this interview with DUPE AYINLA-OLASUNKANMI, she talks about her refusal to let her environment take hold of her future, and other issues relating to her acting career.

Why haven’t you taken the same steps as your other upcoming colleagues?

I don’t really like assuming, but I believe it is luck and timing. I have a lot of faith and I am waiting for that time. And maybe I don’t have the body like others that can sell movies; like a busty front, or an attractive backside. I can’t sleep my way to fame, despite the strong temptations to grab the opportunity given to climb the ladder of fame in the “easiest’ manner”, by sleeping around, I have chosen to stay focused and let success come at the right time.

I have been approached by many, including popular actors and producers. They all believe that once you have made up your mind to be in the movie world, the best way you can be known is to dance to their tune. But that has made me stronger.

I have been around for a while now, and see the way things are done. Once you agree to sleep with one of them, you will get tossed around. I don’t want that for my career, which may be why I don’t get called like the others. I was recently at an audition for a popular production company, where I was selected to play the role of a Warri babe. The role went to someone else, because the director wanted his own person to play that role. That is how the whole thing goes , which is why talented actors and actresses are yet to have a break. The industry is corrupt, and talent is seen to be secondary.
I have seen cases where talented people are marked down, and friends put in their place. That is where favouritism comes in.

My first acting gig, was through the film school, where I met Zeb Ejiro. He introduced me to some people in the industry. I also sing, though not professionally. That was the first time I met Fred Amata. After the performance he insisted on meeting me. He has introduced me to people as his talented sister from another mother ever since . I have thereafter attended auditions and taken roles. But the challenge is sometimes you don’t have what the producers are looking for; like height, body, face and other factors.

You mentioned Zeb Ejiro and Fred Amata, should’nt those names have opened doors for you?

I ask myself the same question sometimes. But it does not work that way. The industry has grown, leading to an influx of new directors and producers, who dish out good movies. The ones I mentioned were part of the starters of Nollywood, but they are no longer as strong as they used to be. They really can’t do much, and can only offer encouragement. The industry is more challenging than it used to be, financially and creatively.

The clique thing is another factor, it means that you have to belong to a particular set of people to gain recognition. If you have noticed, in Emem Isong movies, you will see a certain set of people. And when you see a new face, the person must have a strong link to them. The producer has a film school, but I have never seen her feature any of her students. Is she saying, she has not seen any talented student in her school? Even her students complain; she doesn’t use them, she goes for her friends to shoot her movies.

They don’t really give talents a chance. Making it hard for new talents to rise.