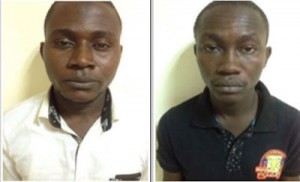 DSS has revealed that the campaign to rid the agency of bad eggs has paid off following the arrest of two of five of its staff involved in robbery and sharing of N310 million belonging to a bureau de change operator in Abuja last month.

It recovered N66.4 million from the operatives. All the five staff were attached to the National Assembly.
In a statement signed by Tony Opuiyo, the Service listed the names of the suspects as Abdulrasheed Ahmadu Maigari, Solomon Inusa, Peter Okoye, Patrick Ishaya and George Mwatapwa Ibbi, noting that gang leader, Maigari allegedly conspired with four other colleagues to carry out the nefarious activity.

Stressing that the DSS action was in line with the President Muhammadu Buhari administration’s zero tolerance for corruption and management’s focus on professionalism, transparency and accountability, the agency pleaded with the public with useful information on the fleeing staff.

“DSS wishes to inform the public that the Service has arrested two out of five of its staff involved in the robbery and sharing N310 million belonging to a bureau de change operator on November 20, 2015 in Abuja.

“While three of the DSS staff are now at large, the military authorities have commenced a detailed investigation of five of its personnel also involved in the crime.

“Preliminary investigations have revealed that Maigari of the DSS conspired with four other colleagues of his namely: Solomon Inusa, Peter Okoye, Patrick Ishaya and George Mwatapwa Ibbi to carry out this reprehensible act. The five military personnel were led by one Captain Hussein Ishaku Mshelia.”

Meanwhile, the Service has arrested Maigari and Ibbi and Mshelia, who was arrested by the Army.
“A total of N66,437,445.00 and $6,200 have so far been recovered, while efforts are being made to recover the remaining amounts.

It is to be noted that security agencies now act in concert, thus the joint investigation undertaken with the police, army and the DSS.