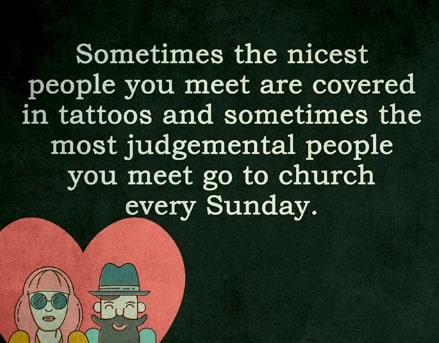 The Unfair Judgmental Attitude Of Nigerians By C Udechukwu

I was talking to a good friend of mine the other day. We were discussing about the judgmental attitude of Nigerians. Some of these fellows think that they are better than the rest of us just because they don’t commit the same sin as us.  For instance, I’m a smoker. I know how some none smokers look at me while I smoke my cigarette. They have already assumed I’m a bad person, or that I would not amount to anything in life.

I’m better than most of these people. I’m doing fine. But I realized, even if I don’t smoke, they would probably still find something bad to say about me. They would say a guy from a good Christian home would not grow dreads, have full beards like a mad man, or how I wear my clothes like someone without home training. LOL! I still don’t understand why we (including me, I’m guilty of this) judge other so easily without getting to know them first. Personally, I try to talk to someone, or let them talk me before I make my assessments about the person.

Prostitutes are casted as rejects in the society by the same people that pays for their service. Let me first state that I’m in no way endorsing prostitution, I’m not defending their choice of work nor am I encouraging any girl to go into prostitution. All I’m saying is before you condemn them, talk to them and know why they choose this particular type of work. Most of these girls may turn out to be respectable and successful people in the society. The society condemns so many things that are not even relevant to our values. I was at a gathering one time, and someone said “all women are ashawo.”

I was startled and angry at the same time. I thought that he meant every woman somehow has engaged in prostitution one way or the other. This kind of generalization angers me. This is because I know many really solid girls, and I can boldly say they have never engaged in prostitution. I eventually understood were he’s coming from. All the girls he has ever had sex with demanded something from him. They either ask for money or favors. What he doesn’t understand is that, some of those demands are not payments for sex. It’s just natural for girls to want something from you once both of you are dating, no matter how little.

I once met this preacher, he was telling me and my guys how he wanted to convert some prostitutes, bring them closer to Jesus, and save them from going to hell. Already, he had concluded they are going to hell. He didn’t consider the fact they might repent and be forgiven. I became curious. I wanted to know what his plan was; I wanted to know what he was going to tell them. He said he was going to preach to them the word of God, he would show them places in the bible were prostitution was condemned.

But for once he never mentioned what he would do after he succeeded in making them quit the work. What he didn’t realize is that, at the end of the day those Prostitutes would still have to earn a living. Besides,  getting a regular job is not easy. It also didn’t occur to the preacher that those prostitutes are not entirely the problem, it’s those patronizing them. Because where there is demand, definitely there would be supply. So cut off demand and supply would seize.

In my opinion, the preacher has a good heart. He really wanted to save those girls from whatever he thought was wrong with them, but he was going about it all wrong. Firstly, he already condemned them by assuming they are definitely to going hell. Secondly, he’s treating these girls like a defective product that need repairing. Nothing is wrong with them, just condition and wrong choices they made.

Lastly, he didn’t consider what they are going to do after they stop the bad work, as he put it. While advising them to quit their work, he should have provided or suggested an alternative for them.

I think the preacher should leave God out of it, and talk to them like normal human beings that need to know better. Or better yet, leave them alone and let them be, after all it is their body.

Continue Reading
You may also like...
Related Topics:attitude, judgmental, Nigerians