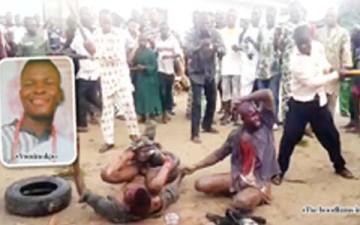 When the news reached me yesterday, I thought it’s one of those fake news circulating the blogsphere but to my surprise, the story actually happened.

It happened in the crime-ridden area of Badagry Local Government Area in Lagos State Nigeria around 3pm on Wednesday.

The death of Kazeem and a his friend, Ifechukwude Nwainokpor, a 25-year-old Undergraduate student of Delta State University has brought tears to many including myself.

If you have the heart to watch the YouTube video, trust me you’ll cry.

This brings to mind the death of 4 Uniport students killed by ALUU indigenes a while back.

When will these senseless killings stop in Nigeria.

Why do people like to take law into their own hands.

For those who missed the story here is a detail report from Punch Metro.

An 8-minute video clip of the gruesome killing, which was made available to PUNCH Metro, showed the two victims handcuffed together. They were covered in their own blood and beaten to death with sticks. Tyres were also put round their necks.

An irate mob could be seen in the video, shouting, “die, die, burn them, burn them.”

At some points in the video, a policeman was seen interviewing the boys. He asked who sent them (victims) to rob the area, an accusation they denied. One of the hoodlums, holding a sharp object attempted to cut off the private part of one of the victims.

Nwainokpor could be seen pleading with the hoodlums and policemen to spare his life, saying he could identify himself if given a chance. His plea, however, fell on deaf ears.

Our correspondent, who visited the family of Nwainokpor  on Tuesday, learnt that the lynching took place around 3pm on July 21, 2013 in Ajara area of Badagry, a community not far from Nwainokpor’s family home.

His father, Samuel, told PUNCH Metro that his son was arrested while passing through a street in the area  but a misunderstanding later ensued and the hoodlums pounced on  him  and Kazeem.

He added that  Nwainokpor, who was nicknamed Ify, was a final year student of Geology and Mining.

He said, “On that particular day, I was in Ghana when I received a telephone call  that I should come immediately. My wife was in Delta State taking care of her   mother.

“When I arrived two days later, my relatives and the caretaker of my house  told me that my son was killed in the Ajara area along with his friend. I was devastated.

“I got my son a  temporary job with a Customs licensed  agent since their lecturers were on strike.  He worked everyday except on Sundays when he visited his  friends. On that day, he went to see Kazeem and they were strolling around Ajara.”

Samuel said because there had been a robbery in Ajara four days earlier, some of the residents were on the lookout for strange faces.

He added that when the youth  saw two unknown young men, they  accosted them and an argument ensued.

He said the youth  called the head of the vigilante group   in the area, one Asiribo.

He said, “Asiribo came to the scene with a locally-made pistol and handcuffs. He handcuffed my son and his friend  before asking them questions.

“Later, it was decided that the boys be taken to the Baale, Agano Oniyon of Agamade Ajara. But as they were going, Asiribo, while trying to return his gun into its  pouch, mistakenly shot himself in the stomach and died.”

Samuel said Asiribo’s death infuriated the youth, who blamed the boys for  his  death.

“The mob picked up sticks  and beat them to death. Policemen were there,”   he  said.

Holding back tears, the retired immigration officer   added  that the police treated the matter as a robbery case. Beating  his chest,  Samuel said there was no way his son would have been involved in  armed robbery.

He said, “I have been living in Badagry since 1982. I have  only two children and Ifechukwude  is the  first. Ironically, he was born in that same area where he was killed.

“I have lived in this area without any trouble and  the residents  can tell you that my sons are good  boys.”

Nwainokpor’s boss, Aloysius Onyenibedi, described him as an honest and hardworking person.

“I trusted him to the extent that I used to keep a lot of money with him. He was good to my children and was honest,” he said.

The Nwainokpor family berated the Divisional Police Officer, Badagry Police Station,  Dankoli Mohammed, for the manner he treated the case.

Samuel said when he approached the DPO, he was told that his son was killed at midnight for armed robbery.

He said, “When the policemen came to take the corpses, guns were planted on them. Policemen at the station told the DPO that they were robbers. Their corpses were taken along with that Asiribo to Badagry General Hospital’s mortuary.

“The following morning, the DPO released Asiribo’s corpse for burial without investigation. My relatives went to the station and after showing the DPO the video, the matter was transferred to the Area K Command.

“At Present, Asiribo’s son has fled, while the DPO has been unable to identify the policemen who were present at the scene when my son  and his friend were killed.”

PUNCH Metro however learnt that through the video, some people had arrested one of the perpetrators. The suspect had been transferred to the State Criminal Investigation Department,  Panti, Yaba.

The spokesperson for the state police command, Ngozi Braide, said, “The incident is quite pathetic. Even if they were armed robbers, no one has the right to take the life of another. Why then do we have the police and the judiciary? The Nigerian police as well as the law condemn mob action and jungle justice. The commissioner of police has set up a high- powered investigation body to investigate the matter.”

Instead of child bride law, why can’t the senate pass a law banning jungle justice in Nigeria?

I feel for these innocent men.

May their soul rest in perfect peace.