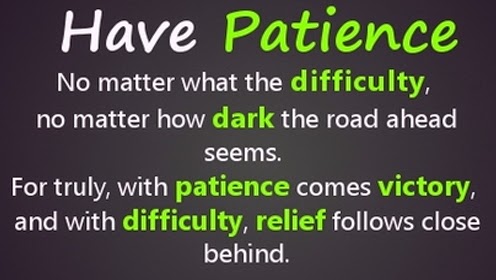 Nov 11, 2014 – Just A Second, That’s All You Need: Employing The Power Of Patience To Achieve Success In Life By  Samuel Ufot Ekekere

The anticipation that characterizes the waiting period may be huge but this often fails to
guarantee the kind of life that the common hustling man on the street wants to have.

The assurance of a better future for some is only generations away that the picture they very much desire to live in is a far cry from reality. In the face of this myopic viewed belief is
one truth; that it only takes a second for change to happen.

A graduate friend from one of the universities had this experience to share. He had managed to make his way through school with the belief that once he got off school, it was only a matter of days before he picked up an appointment with one of the blue chip companies in town.

It happened that he was seeing from the perfect situation if all was well. However, the ideal situation doesn’t happen always. He was ill-prepared for what would hit him. It turned out that his desire was only a dream that he had to strive for.

Months passed and it became years and there seemed no certainty that a door would be opening anytime soon. His situation had moved from bad to worse that he finally concluded himself unfit to continue with life. In the face of his uncertainty, fate had something more. God was certainly around watching. It happened that on one faithful day while he pondered on his predicament and how he was going to make through another day, he heard a knock on the door.
A letter had just arrived in the hands of the postman. Unsure what the letter contained, he
opened it and inside it was his appointment letter for immediate appointment with benefits of a car, a well furnished apartment and a salary in millions. It seemed like a dream, but it was reality.

The experience above is only one of many stories of change. Your case may not be job but it may be your quest to climb up your job ladder, a deadening sickness, a quest for admission into a tertiary institution, a wayward child, a difficult parent, a quest to survive, a challenging relative, a physical challenge, a desire to pass an examination, an unpleasing spouse etc. Just a second is all you need to overcome them.

That “second” moment is always around the corner waiting for the right time. But the time often seems like forever because sometimes we are too impatient to wait and too patient to act. Our impatience at
waiting to have that moment arrive is because we expect the ideal which naturally is “now”. We fail to acknowledge too that “now” is relative and it shifts as time flies.

We seem very patient at not taking action leaving ourselves to fate and then hate the fact that
fate isn’t getting us what we want at our perceived ideal time.
No matter how difficult one’s present predicament is, that special second of change is always around the corner. That second only eludes us at each time of trying because either it isn’t the right time for it to reveal itself or we haven’t done enough to merit that change time.

While we wait for that brief future second, the route to that time begins from each now second. Each second of change counts, when we act as to expect our change at each second. This expectation is an
actionable one.

Are you afraid you will be overwhelmed by your current fears about that seemingly impossible task? You might have given your best shot and what you get in return is a chain of losses. Maybe you just have to take one more second of failing to hit the right time for the overturn of your fate. Don’t give up. Whatever it is that troubles you, through your spines down to your marrow, that has failed to give you rest, you may just be that one second away from a new story.

Don’t give up at pursuing the kind of possibility you want to see however bad present moment may be, because you never will tell when that second of change will arrive. Just wait, it’s coming.