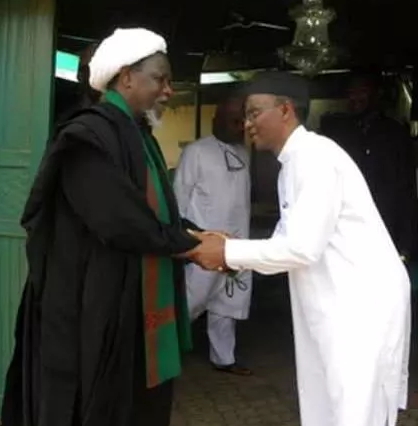 The Islamic Movement in Nigeria aka  Shi’ite sect, has described the Kaduna State Governor, Malam Nasir Ahmad El-Rufai as their enemy and anti-Shi’ite governor.

The sect in reaction to the Thursday night state broadcast by the governor on the recent clash between members of the sect and men of the Nigerian army stated categorically that, “It is clear that the governor is more like an extremist anti-Shi’ite governor and not a state governor.”

Shi’ite in a rejoinder by the President of its media forum, Malam Ibrahim Musa said, “Going by the concept and tone of the state broadcast on the extra-judicial killing of thousands of members of the Islamic Movement in Nigeria by the Nigerian Army, delivered by the Kaduna State Governor, Nasir Ahmed el-Rufai, it is clear that the governor is more like an extremist anti-Shi’ite governor and not a state governor.

“Although the governor took his time in his speech to elaborate on rights to religion and social association, but he chose to deny only the Shi’ites such rights who he sees as his enemies.

“Clearly, he spent considerable time collecting propaganda details indicting the movement, which further buttresses the point that the state governor has his hands soiled by the blood spilled in the mass extra-judicial killings perpetrated by the Army.

“In that circumstance, no justice should be expected from a speech made up with details only provided by the antagonistic culprits without hearing from the other party who are the victims in this case.

“During the one-sided speech, he brought up a number of allegations that he said they discovered. We will take up these one after the other:

“He alleged that our centre had no building permit and such other allegations. One wonders why if the Kaduna state government felt the Hussainiyah was wrongly erected or breached planning permits, they did not resort to legal action rather than use of brutal force. Why not get a court order to effect an eviction? Or does the government mean there are no magistrates or Alkali left in Zaria anymore? For Governor El-Rufai to claim that there is no valid paper on the land on which Husainiyya was built as the basis for this military attack, only further proves that the attack was premeditated.

“We are equally astonished when the Governor in his broadcast claimed that “they had tried to forcibly acquire the property of their neighbours; this is apart from subjecting residents to an illegal curfew.” We challenge the governor to cite one particular case where we forcibly acquired a property, let alone a time when we imposed curfew.

“The governor also claimed that “There had been tension in parts of Zaria since Thursday, 10 December 2015, when members of the Islamic Movement of Nigeria were alleged to have attacked Gabari, a community on the outskirts of Zaria, in continuation of a dispute over a mosque.”

“We would like to ask Mr. Governor how many disputes over mosques have been reported in the 37 years that the IMN have been there in Zaria? The idea that Shiites will go and take over a Salafi mosque is as laughable as the idea that Christian evangelicals will raid a Catholic cathedral and tell the adherents to get out. This big lie cannot stand any scrutiny. What happened in Gabari is not “Mosque snatching” as the governor claims. It was a case of some Salafist bent on attacking the Shiites in the neighbourhood. In the process they killed one person the week before and a further three Shiites on Thursday. The governor cleverly stated this in his speech as if to show that we were not the victims but the assailants.

“The Governor made mention of the Arbaeen symbolic trek as an instance where we blocked roads for four days when he stated, “In the last two weeks, the Islamic Movement of Nigeria has also illegally occupied federal roads. Over a period of four days, they took over one side of the federal expressway between Kaduna and Zaria, and the roads to Kano and Katsina.” Clearly, this is a deliberate attempt to twist the facts. During the Arbaeen symbolic treks, we block only limited part of the road, and this is to protect persons from traffic accidents, control mass movement and avoid chaos on the roads. The governor here was trying to give the impression of a complete occupation of a lane for four days. That was not the case. Blocks were only from junction to junction on the roads. The public was informed about these little inconveniences with apologies on public radio and television stations throughout the trek. Road users during the period would be surprised by the governor’s statement.

“How does this compare with similar road blocks by others such as the Military itself that blocks from Jaji to Zaria, and at times from Kaduna to Zaria or within Zaria metropolis during their parades? Citing road block as the reason for this brutal attack is just laughable. Where in the law books is it written that those who block the roads should be massacred without trials?”

The sect also accused the governor of fiddling with the truth by saying in his broadcast, “In addition, members of the movement are alleged to openly carry and use offensive weapons.” They challenged the governor to mention those weapons they found when security agents razed Husainiyya to the ground or Sheikh Zakzaky’s residence. While the military involved in this operation said in its press conference that they did not find any weapons after all the mass killings they did in Zaria, the governor in his desperate attempt to blacklist the movement, still talked of offensive weapons. From the speech of the governor one can deduce that he did all he can to portray the movement as assailants.

“After leveling all allegations against the movement, the governor went ahead to talk of setting up a Judicial Board of inquiry. One wonders why he didn’t leave the inquiry to determine who are the assailants and who are the victims. Definitely the scope and mission of the inquiry could be problematic. The army is a federal institution. It would be difficult enough for a state judge to inquire into what they have done when they are not answerable to state officials. How will such a judge now also overturn conclusions already reached by the governor?”