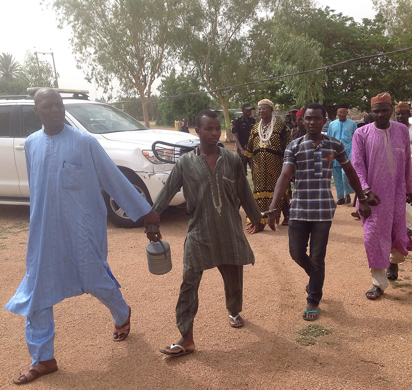 The killers of Mrs Bridget Agbahime, an Imo State indigene murdered at her shop in Kano over alleged blasphemy have been set free.

The suspects identified as Abdullahi Musa, Abubakar Abdullahi, Abubakar Zubairu, Ahmed Dauda and Mustafa Abdulmumeen were slammed with 4 counts of culpable homicide, mischief, joint act and inciting disturbance days after they were arrested in connection with the murder of 74-year-old Agbahime.

But yesterday, the suspects were set free and the case terminated.

Chief Magistrate Muhammad Jibril claimed that he was advised to terminate the case and set the suspects free by the Attorney General of Kano State.

The suspects lawyer, Gambo Abdulsalam thanked the Attorney General for throwing out the case while the suspects thanked their families and Allah for setting them free.

Bridget Agbahime was stabbed to death on the 2nd of June 2016 for refusing to allow a Muslim youth to use her shop for Islamic prayers, a case the man sees as blasphemy against Allah.

May Bridget’s soul rest in peace and may divine judgement come upon the blood thirsty youths that murdered her.