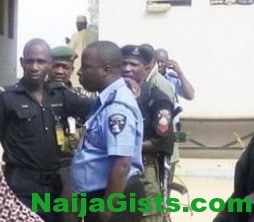 The defendants, who hailed from Sumaila Local Government Area Kano, are facing a two-count charge of criminal conspiracy and culpable homicide, contrary to section 97 and 221 of the penal code respectively.

The prosecutor, Insp. Pogu Lale, told the court that a good Samaritan reported the case of culpable homicide to Sumaila police Division, on September 30.

Lale said on Sept. 24, at about 6 p.m the defendants criminally conspired with their six other brothers now at large and strangled their biological Father, one Adamu Gamji, 55, to death.

He alleged that the defendants suspected their Father to be responsible for the death of three members of their family and also the sickness of their brother one Sale Adamu.

When the charges were read to the defendants, they pleaded not guilty.

The Chief Magistrate, Muhammad Jibril, ordered the remand of the defendants in prison custody and adjourned the case until Nov.16 for a mention.