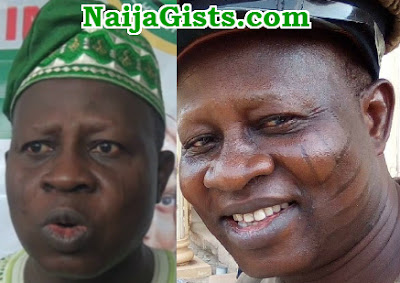 What project are you doing presently?

Many women don’t want their husbands to touch their breasts. So, a lot of people who is going through that will still be wearing bra. That is why we are putting up a movie to educate a lot of our women.

Tell us that thing people always get wrong about you?

People usually take me for Aluwe; they call me Aluwe and Aderupoko, Aluwe! Maybe because we both have tribal marks and we act similar roles. Some people even call me Elesho and Elesho is light in complexion. People don’t know I am a fashion designer.

Everything I have on me, I make it myself. I make every costume I use in every film I act. That is what I do alongside acting.

Did you learn fashion designing before you started acting?

What is your view on the happenings in Nollywood where female act half naked and sometimes acting pornography, which is against our culture?

It’s not only the theatre industry that’s doing movies but we now have different people who are doing this now.

Nigeria has Nigerian Censor Board but the people behind it are not capable because it’s not their jobs; you can’t put a carpenter to handle theatre industry. Government gave everybody the license to act films.

Continue Reading
You may also like...
Related Topics:aderupoko, board, nollywood, sensor