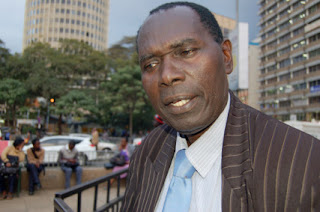 Dola Indidis, a Kenyan citizen who is a lawyer by profession has filed a lawsuit over the crucifixion of Jesus Christ.

Dola who claims the Crucifixion of Jesus Christ is unlawful has petitioned the International Court of Justice to nullify the conviction of Jesus by Pontius Pilate.

The Kenyan lawyer, a Roman Catholic by denomination accused Pontius Pilate, the Roman Governor of Judea at the time of Jesus‘s death of abuse of office, judicial misconduct and prejudice.

Dola Indidis who claims Jesus came to the earth as a human being said it’s all about human rights. He feels that Jesus Christ suffered greatly.

He is hereby challenging the modes of questioning used in Jesus’s trial over 2000 years ago.

“Jesus came here on Earth as a human being,“Now when he died, he was not given an opportunity to be heard. No one speaks for him.” – Dola told Kenyan Citizen Newspaper.

His petition has brought shock to Christian leaders in Kenya.

This man is madly in love with master Jesus.

Do you thing the International Court of Justice will consider his case?