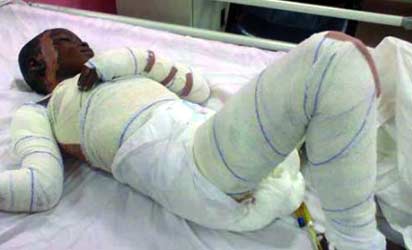 An innocent girl who was set ablaze by her mistress in Surulere Lagos on Saturday has passed away.

11-year-old Ita Bassey, who worked as a maid for a nurse (Mrs Nkese Iroakazi) who works at an hospital in Surulere was set ablazed over an argument on a missing piece of meat.

She suffered serious burns and was rushed to the Burns and Trauma Centre at the General Hospital in Gbagada last Saturday.

The girl who suffered 95% burns all over her body died in the early hours of today, August 2nd, 2013.

The girl’s fate appeared sealed last Saturday when she was said to have been set ablaze. sources said the girl ran out of their apartment at 7, Adeniran Ogunsanya Street, Surulere, unto to the main road with fire all over her body as she cried for help from passers-by.

It was gathered that a motorist immediately stopped her vehicle and used the fire extinguisher in her car to put out the flames.

Her mistress has denied any involvement in her death.

Nkese said she was in the sitting room when she heard a loud cry and rushed out only to see the girl on fire and called on people to help put out the fire.

Chai madam lie small… How can she pour kerosene on herself?

This is so sad.