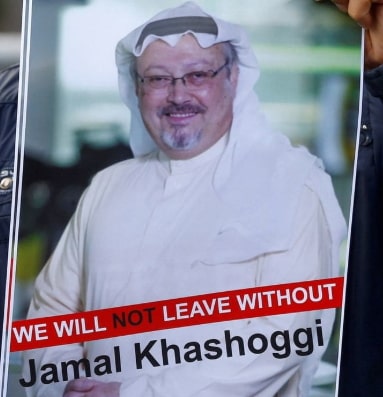 Our Chibok girls were kidnapped on April 15, 2014. Inexplicably Our Dapchi girl-child, 15, Leah Sharibu is not released

The Kasuwan Magani massacre with 55 dead and 20 injured in Central Kaduna followed by a herdsmen attack killing 15 farmers in Bauchi must question our nationhood. The death or injury of one person is one too many.

Was Saudi Arabian journalist Jamal Khassoggi’s horrific murder a premeditated chokehold from 15 men or a beating gone wrong? Was the body dismembered and scattered? Reality beats the imagination.

Medically, there is no humane murder and all governments have killed, creating ‘Khasshogi Incidents’ everywhere starting with colonial genocides and ‘the most important assassination of the 20th Century – Prime Minister Patrice Lumumba – similarly cut into pieces but then burnt in an oil barrel by Belgian and Congolese soldiers for being a communist when America and the West wanted control over Congo’s minerals against Russian communist threats. Mobutu subsequently ruined the Congo/Zaire! Nothing new under the sun!!

Many are tortured and killed outright, ‘no tears, no cry’ except for grieving families unwittingly talking to executioners washing blood from overalls of death. The methods are legion, a ‘credit’ to the devilish brain of Machiavellian homo sapiens. Bullet, car crash, burning, bomb blast, beating, crocodile/lion/rabid dog/pig eaten, drowning, raping to death. Pealing of skin while alive which was popular during the Catholic inquisition -flaying with burning alive at the stake, cement encasing legs and body alive or dead and cast into the river. Helicopter drops of live victims into shark or crocodile waters of onto land – Argentina, Chile, Uganda. Putting victims alive or dead into mincemeat makers for shops, popular with the mafia if they did not machinegun victim first.

Electric shock with generators in dark cellars or police tasers and brute force and shooting to kill, were and are popular with government officials as are spies armed with poisons, gas or nuclear material and simply starving to death, all adequately publicised in Breaking News and films and books through Hollywood and other places. Nigerians railed against excesses of SARS, police and military cells and Amnesty International has constantly criticised human rights abuses. Last week in Kwara State, the politicians have already protested a ‘plan to rope politicians’ into the discovery of human parts where the arrested have identified their clients.

Unfortunately, the regular ritual killings and dismemberment of bodies, the ‘’Khashoggi Incident’ is frequently reported in Nigeria and African countries for ritual ceremonies for money making, protection, politics, success and victory over enemies but no end users are ever caught. Disappearances and one chance trips have been common historically. The draconic military regimes of South America and Africa were notorious for disappearances around coup plots, real and imagined, democracy opposition struggles, and the ‘power of being in power’ where human rights were the first casualty.

No one should forget the victims of riots from coal miners’ strike days in Enugu and the www -wild wild west and wetie – the horrific petrol burning of political opponents and families in houses demonstrating the murderous history of democracy. Following the pogroms in the North and the subsequent one million plus deaths from war, starvation and executions during the Civil War 1967-70, the Buhari-Idiagbon, Babangida and Abacha violent regimes stand out for excesses of demagogic democracies littered with bodies like those of the Odo- Ona Ibadan Kill and Go police victims, the numerous victims of political thugs of politicians in Oke Ado and Molete, Onagoruwa, the Abiolas, Pa Rewane, Ken Saro Wiwa and the Ogoni 9.

I worked with Professor CSO Sowunmi of Amnesty International and many others on a Victims Support Fund to bring relief to families of the incarcerated and document Abacha victims. How could we have forgotten/forgiven Al Mustapha so soon with no apology? But all governments have tasted power drunkenness and fulfilled the thirst for killing.

For example, Kunle Adepeju in 1970 UI. Under Obasanjo as a civilian president, the murdered victims of Odi in retaliation for soldiers deaths. The seemingly acceptable execution of voters and politicians like Funso Williams, Chief Bola Ige, Ayo Daramola, and others testify to the acceptable violence of ‘The Democracy Wars’. We should add the checkpoint deaths, extrajudicial killings, most unknown, bodies thrown into the bush and Olympian Dele Udoh – Google him. The Apo 6.

Let us add the Boko Haram and herders war victims, dead or as Internally Displaced Persons (IDPs) numbering in their 3-5 millions. The onslaught of the Okada epidemic with its mounting death and disabled victims numbers. The huge cult problem in schools and universities and gangs in neighbourhoods and NURTW’s bloody trail in politics and victims of modern slavery and human slavery by a political government that enslaves its people by neglecting education. We must not add to it come 2019 election. ‘Khashoggi Incidents Everywhere, No Culprits Anywhere’ like ‘Murder, murder, everywhere and no culprits anywhere!!’

But Nigeria remains a great country. Abi no bi so? After all the US, Britain, Belgium and South Africa and the Middle East rode to economic and political success riding on the broken backs of 16-18th century 50million slaves and their progeny.

After 100 years of internal political slavery of now 150m+ people in Nigeria. It is time for liberation!! Shall We Overcome???? When exactly, please? Politicians should ‘Make Nigeria Great To Live In’ and not just ‘Horrible To Die In’!!

[About the author: Tony Marinho, Uncover ‘I LOVE NIGERIA’ KNOWLEDGEABLE CANDIDATES for 2019 -SDG 16.]

Continue Reading
You may also like...
Related Topics:incident, Khashoggi