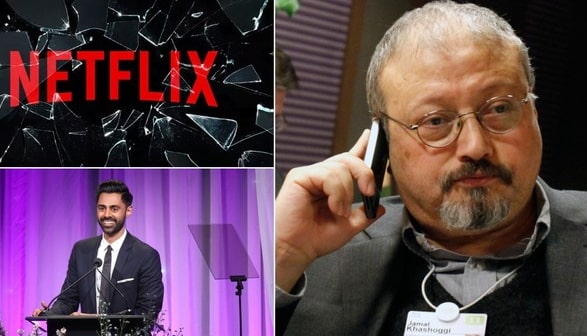 Online streaming giant Netflix has removed an episode of a satirical comedy show from its service in Saudi Arabia over its criticism of the kingdom, following a legal request by officials in Riyadh.

The move was widely denounced by rights groups including Amnesty International, which said it risks facilitating a crackdown on freedom of expression in Saudi Arabia.

In the episode of “Patriot Act with Hasan Minhaj,” the American-born Muslim lashed out at the kingdom after the October killing of Washington Post columnist Jamal Khashoggi in the Saudi consulate in Istanbul.

He specifically criticized Crown Prince Mohammed bin Salman, and was also critical of the Saudi-led military campaign in Yemen.

“We strongly support artistic freedom worldwide and removed this episode only in Saudi Arabia after we had received a valid legal request — and to comply with local law,” a Netflix spokeswoman said in a statement Tuesday.

The streaming giant added it had received a takedown request citing an article of its cybercrime law as the reason. Article 6 of the law states that “production, preparation, transmission, or storage of material impinging on public order, religious values, public morals, and privacy, through the information network or computers” is a crime punishable by up to five years in prison and a fine not exceeding 3 million Saudi riyals ($800,000).

The episode can still be seen in other parts of the world — and in Saudi Arabia on YouTube. – ‘Quite outrageous’.

In December, the US Senate approved two symbolic resolutions blaming Prince Mohammed for the killing of Khashoggi, after intelligence reports pointed in that direction, and urging an end to US participation in the Yemen war. “Saudi Arabia’s censorship of Netflix… is further proof of a relentless crackdown on freedom of expression in the kingdom,” said Samah Hadid, Amnesty’s Middle East campaigns director.

“By bowing to the Saudi Arabian authorities’ demands, Netflix is in danger of facilitating the kingdom’s zero-tolerance policy on freedom of expression and assisting the authorities in denying people’s right to freely access information.” Karen Attiah, Khashoggi’s editor at The Washington Post, said Netflix’s action was “quite outrageous.”