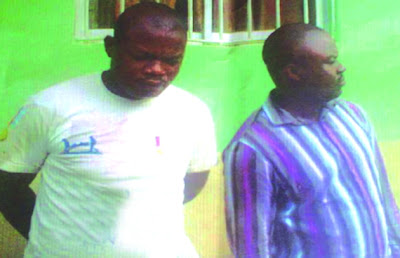 Two officers of the Kick Against Indiscipline, KAI, have been arrested for allegedly demanding for N800,000 bribe from a trader at Iddo Market, Oyingbo area of Lagos State, southwest Nigeria.

The KAI officers, Femi Ajayi and Samuel Awoseyin allegedly demanded for the money from the trader, Alhaji Mohammed Haruna.

The trader, who is the Secretary of the Iddo Outside Market alleged that the officers had illegally sealed up the market’s toilet and accused the leadership of the market of non-compliance with the sanitation law of the state.

Haruna said as he could not provide the money, the KAI officers allegedly collected the sum of N30,000 from him to get the toilet re-opened.

He promptly reported the matter at KAI’s headquarters while the authorities ordered the arrest of the suspects, who were first detained at the Taskforce office at Alausa, Ikeja. They were later released to the KAI authorities to take appropriate action against them for bring the body into disrepute.

A statement from the Public Relations Unit of KAI and signed by Mr. Tunde Olusesi said after the officers demanded for the N800,000 bribe, the trader begged and offered them.

It said the two officers were summoned to the Head Office of the brigade after the trader made the allegation about the extortion.

The officers were suspended for three months without pay pending the outcome of investigation, which the authorities said was ongoing.