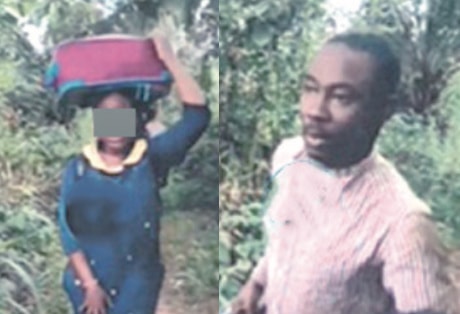 2 weeks after their rescue, the 15 passengers of the hijacked Peace Mass Transit bus who were taken hostage for three days by daredevil kidnappers are yet to get over the trauma of their ordeal.

Inside the forest along Omerelu-Owerri Road, Rivers State, the captives were robbed and the females among them gang-raped. For three days, they were continually subjected to various forms of maltreatment including being blindfolded, with their hands and feet bound and beaten severally.

Journey to hell
Their nightmare of August 8-10, 2018, started after their vehicle, which took off from Abuja, was flagged down on the highway by men they assumed were security operatives at a checkpoint. No sooner were the vehicles halted––Nothing Pass God and Peace Mass Transit buses––than they were diverted into the forest along Omerelu/Owerri Road at about 10:10 pm.

For 24 hours, the whereabouts of the vehicles and their human cargoes remained inexplicable until one of the victims escaped from the forest at 7:30 pm on August 9. He found his way to the Elele Police Station and raised the alarm about the dangerous development inside the forest. 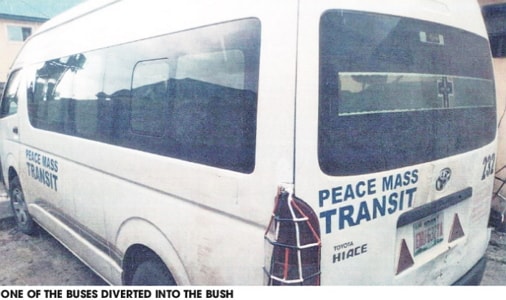 Led by the escaped hostage, anti-kidnapping policemen of Elele Police Division stormed the forest on August 10, 2018, and in a four-hour operation, located and rescued the remaining 15 passengers. After regaining their freedom unscathed, the passengers combed the bush and recovered what was left of their belongings –– luggage, ATM cards and clothes –– from the hideout.

Reliving the three-day nightmare
One of the victims, a lady (name withheld) told Saturday Sun: “We boarded a Peace Mass Transit bus going to Port Harcourt, from Utako, Abuja. We got to Omerelu-Owerri Road, Rivers State around 10 pm. Suddenly, we saw 10 men who blocked the road. They ordered our driver to divert the bus to the bush. Then they blindfolded the female passengers while the males had their hands and legs tied. They started beating us. Then they pounced on us. Four of the men raped me there in the forest. They tried to force themselves on another female, but somehow they couldn’t succeed. Amongst us was a mother of two children. But they didn’t touch her because she was pregnant.

A male victim, Pastor Henry Kingsley, described the experience as “hell in kidnappers’ dens.” “We were taken into the forest and beaten like babies,” he began. “They collected all our belongings immediately they had taken us hostage. We are surprised when the kidnappers called their girlfriends and started sharing our items to them to send to their parents or sisters in the village.” Even in the face of danger, Pastor Kingsley tried to do some evangelism by preaching to the kidnappers to repent from their evil way. He, however, got a rude rejoinder from his captors who told him “what we are doing is our profession.” Finding himself at a hopeless end, the clergy led his fellow captives in prayer, praise and worship in the kidnappers’ den.

Thankfully, in the next few hours, help arrived. “We heard a gunshot and our captors took to their heels. That was how we were saved by policemen,” recounted the clergy.

Another victim, Mrs Blessing Ogoo also obliged Saturday Sun with her experience. “We were beaten so mercilessly. The gang wanted to rape me, but my saving grace was that I have two kids with me and I am four-month pregnant. So they blindfolded me instead. But they taunted me that my two kids will also join them in their profession. I had rebuked the satanic utterance in Jesus’ name and I had the pastor pray for my two kids,” she said, declaring “It was our prayer to God that delivered us from the power of darkness.”