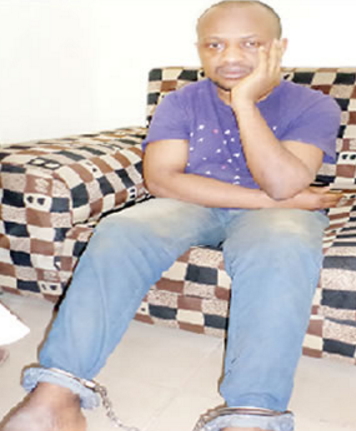 July 8, 2017 – Evans The Kidnapper Moved By Police To Secret Location In Abuja As Gang Members Plan To Free  Him From Lagos Police Detention

If the report NG received moment ago is anything to go by, gang members of Billionaire kidnapper Evans are planning to launch a major attack to free him from his cell at Lagos Police Command Headquarter in Ikeja Lagos.

According to our source, when the intelligence report reached NPF headquarter in Abuja, about 32 heavily armed Policemen stormed the detention facility where he was kept overnight few days ago and whisked him to an unknown location in Abuja.

The top security source said even policemen at the detention facility were not aware of the operation, hence the disappearance report that took the web by storm earlier today.

The source said some policemen among the group who arrested Evans have been bribed by sponsors and fleeing gang members of the billionaire kidnapper to ensure he escape from police detention before Evans was suddenly moved to an undisclosed location in Abuja.

Contrary to earlier report, the Billionaire kidnapper is in good health and corporating with investigators.

Another point raised by our source is that Evans who is not an ordinary criminal has been showing strange manifestations in his cell before this unplanned move.

When pressed further to know the nature of the strange manifestations, the top security said it is beyond what human reasoning can comprehend.

He added that the billionaire kidnapper has been controlling inmates in police custody and due to fear that he might form another notorious gang in police cell, he was quickly moved away.