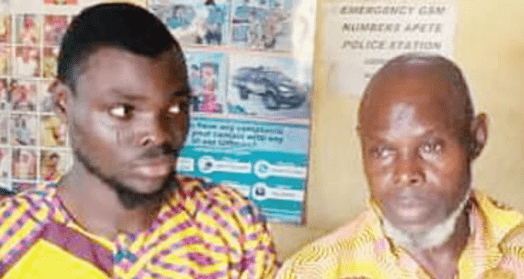 Police in Lagos have announced the arrest of two suspected kidnappers, who kept their victim in captivity for nine days without.

The suspects, Thoa Akorede and Alhaji Muhibudeen Akorede, were arrested by men of the command in Ibadan, Oyo State on July 4, 2019, around 12.16pm.

According to the spokesperson for the Lagos State Police Command, DSP Bala Elkana, operatives of the State Intelligence Bureau followed up on a petition referred to the command by the Force Headquarters in Abuja, with the investigation taking them to Ibadan.

Elkana said in a statement on Wednesday;

“The operatives, with the support of the Technical Intelligence Unit, acted on credible intelligence and arrested two suspects in Ibadan namely: Thoa Akorede and Alhaji Muhibudeen Akorede.

“The victim, one Matthew Isichei Chukwuebuka, 19, was rescued. The victim had been in their custody for a period of nine days without being fed.

“In his statement, the victim stated that he was called on his mobile phone and abducted, adding that he did not know how he got to Ibadan, but on arrival, he was given something to eat from a black pot and he lost his senses and was ordered to surrender his phone.”

According to Elkana, Chukwuebuka’s phone was programmed by his abductors to reject incoming calls except from only the line that they were using to negotiate the ransom.

“The victim said they collected all the money on him and were demanding more. He was taken to an ATM point, where the sum of N10,000 was withdrawn from his account. The abductors demanded the sum of N30m ransom from Chukwuebuka’s family to be paid into his bank account.

“The victim has since been reunited with his family. The suspects were charged to court and were remanded in prison custody.”