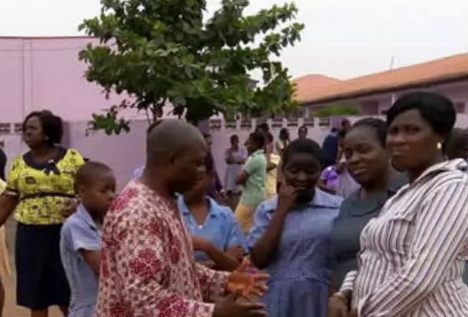 The kidnappers of 3 young girls from Babington Macaulay Seminary school in Ikorodu Lagos have called one of the parents of the students to demand N200 million ransom.

The SS2 students identified as Deborah Akinayo, Timilehin Olisa and Tofunmi Popoolaniyan were abducted from their classroom on Monday during prep.

It was learnt that the kidnappers contacted the father of Timilehin Olisa to make their intention known.

They reportedly told Mr Victor Ayo Olisa, the Secretary of Lagos Anglican School Management Board to prepare the ransom in 24 hour or pick up the dead bodies of the girls.

The development was said to have caused panic among the parents of the girls.

Venerable Olaoluwa Adeyemi, the school principal, who looked very disturbed, vented his anger on reporters who he accused of sabotaging rescue efforts yesterday.

Adeyemi, pressed by reporters to comment on the incident, said: “The girls have not been found till this moment and why do you want me to start addressing the press? Is that the only job we are going to do all day? People are busy searching for the girls while you are busy asking questions.

“You cannot keep disturbing us here; all you need do is to join us in prayers. Honestly, you people are not helping matters. In fact, you’re adding to the problem by disturbing what people could have done at the right time.

“The deputy governor was here and we recounted the whole issue in her presence and the press men asked various questions. Both the Assistant Inspector-General of Police and Commissioner of Police have addressed the press but for everybody to be coming here as if this place is a pilgrimage is not good enough.”