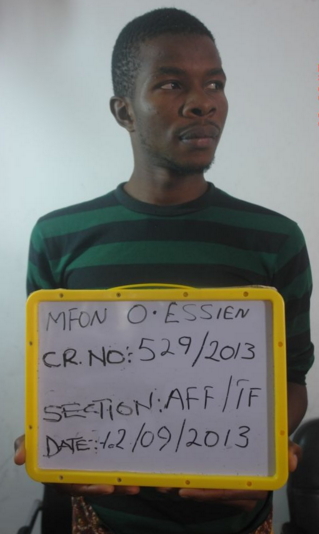 A High Court in Igbosere yesterday sentenced a 27-year-old man to a total of 28 and half years in jail for tricking an American family to pay $3,000 for a fake kidnap of their daughter.

Mfon Obot Essien, aliases David Morris and Femi James, was sentenced by Justice Raliat Adebiyi after he pleaded guilty to a six-count charge of conspiracy, obtaining money by false pretence and forgery.

Essien, from Akwa Ibom State, was arrested in 2013 following a petition written to the EFCC by the United States (US) Department of Homeland Security urging the commission to investigate a criminal organization involved in drug smuggling, money laundering and fraud.

The petition stated that a US family whose daughter travelled to Argentina got a call from her boyfriend claiming that they had both been kidnapped and the kidnappers demanded a ransom of $7,000, which should be sent through money transfer to their associates in Nigeria with the details “David Morris, 302, Apapa Expressway, Ikeja, Lagos, Nigeria 23401”.

Investigation in the US however revealed that the girl was not kidnapped but was under arrest in Argentina for attempting to smuggle cocaine out of that country after being cajoled to do so by her boyfriend of Nigerian descent.

The US authorities then contacted MoneyGram to issue a false money order for $3,000 to enable the arrest of Morris whenever he showed up to receive the money in Lagos.

Essien’s attempt to withdraw the $3,000 on August 2, 2013 at Chevron Lekki Drive branch of Access failed. He tried the following day at the Ikota Branch of the bank and then returned again on August 5, not knowing that a query had been lodged concerning his transaction.

He made another attempt on September 5, 2013 at the same branch unaware that a trap had been set. Essien was then arrested by EFCC operatives when he identified himself as David Morris and asked for his $3,000.

Items recovered from him during the arrest included a forged drivers’ license with No. KSF08417AA2 bearing the name ‘James Femi’ but with Essien’s picture.

EFCC investigation also showed that on July 28, 2013, Essien fraudulently received N237,537.68 from another American, one Mark Mentor, using a forged drivers’ license with No. FFF14411AB6 bearing the name David Morris but with Essien’s picture. He was found to have represented himself to Mentor as David Morris.

Essien had also received, on different occasions, $460 and $900 from another US Citizen, Dylan Johnson, through MoneyGram.

During his arraignment in 2013, Essien pleaded not guilty to the charges, but when trial began he asked to change his plea and was re-arraigned.

In her address on December 9, 2015, EFCC Prosecuting Counsel, Mrs Zainab Ettu told the court that investigations by the commission showed that Essien belonged to “a syndicate of fraudsters who use different machinations to fraudulently obtain money from unsuspecting and vulnerable victims.”

Yesterday, Justice Adebiyi sentenced Essien to the minimum seven years each on the first three counts, and one and a half years on count four. The defendant was also sentenced to three years each on two counts of forgery, bringing the total to 28 and half years.