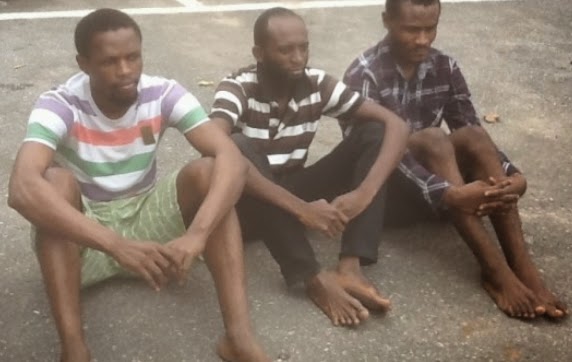 3 suspected members of a gang of kidnappers that murdered ex-Anambra State Governor Chudi Nwike have been arrested by Lagos State Police Command.

The kidnappers were paraded yesterday at the State Police Headquarter. The criminals were also alleged to be the brain behind the kidnap of Supreme court judge Rhodes Vivour’s wife and daughter.

One of them, 31-year-old Godswill Ovwigho gave a chilling details of how they killed Dr Chudi Nwike after collecting ransom.

One of the suspects, Godspower Ovwigho, 31 gave a graphic account on  how his gang killed the deputy Governor after collecting ransom.

“when we succeeded in kidnapping the former Deputy Governor, we demanded for N30million ransom but we were shocked when we received paltry sum of  N5million. One of  our leaders, Rufus got angry that the family of the Deputy Governor brought N5million instead of N30million, he then drove the victim and members of his family who came to deliver the ransom away and in a few minutes, we heard about four gunshots.

“When Rufus came back, he called the wife of the Deputy Governor on telephone and urged her to use the N25million balance to bury her husband. Rufus also told the wife that two persons who came to deliver the ransom have been killed.

“When our leader Kelvin came back he got angry and blamed Rufus for killing the victims. He also reminded Rufus that he is fund of bringing ill luck to the gang because he was the reason some prison warders were killed in Delta State. It was Rufus we were trying to rescue which eventually led to the death of the prison officials.” – Godwin told Daily Sun

The suspect said they were shocked when Rufus narrated how and why the deputy governor and his two rescuers were killed.

“Although after blaming Rufus,our Leader, Kelvin still collected the money from him and shared to us, I got N100,000 only from the loot. They don’t give us good money from the loots, it was only Kelvin and other key members of the gang that enjoys the main loot, we are just minors. Kelvin is the Leader while Rufus is the second in Command.

“We still kidnapped the wife of the supreme court Judge and his daughter .We demanded for N20million ransom and we got exactly the amount we demanded. My own share in that one wasN1.3million.Kelvin and Rufus took the lion share. The Judge’s wife was the last assignment we did before Kelvin and Rufus were killed by security agents.” He said.

Lagos State Police boss, Manko narrated how the police had the breakthrough noting that his officers, Divisional Police Officer (DPO) Aisha Haruna, a Superintendent of Police and officer in charge of the Special Anti-Robbery Squad (SARS) Abba Kyari who prosecuted his anti-crime plans with diligence achieved the result for the command.

His words: “Sequel to the tracking and arrest of one Monday Odieto from Benin, Edo State by DPO Ikoyi Division SP Haruna, over his involvement in kidnapping of the wife of a sitting Supreme Court Judge, Justice Rhodes Vivour and his subsequent confession during interrogation to be a member of 30-man gang of deadly kidnappers who operated in South-South and South East axis of the country. I gave a matching order to the officer in charge of SARS, SP Abba Kyari to go after them for possible apprehension and recovery of their operational weapons.

“After a long manhunt, one of the suspected who was identified only as Godspower was tracked and arrested at Ikorodu on  April 23, 2014 by Kyari and his men. He was identified by Monday Odieto to be a top ranking member of the gang.”

Manko said the gang was responsible for the killing of some Prison official recently in Delta state when they wanted to rescue the members who were being taken to the Court. They  succeeded in rescuing their members but some of them were later rearrested.