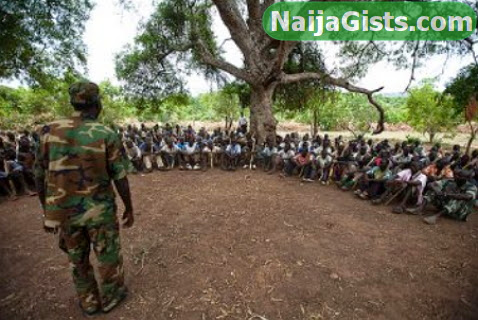 Residents of Riyom and Barkin Ladi village in Plateau state have discovered a training camp being used by armed Fulani cattlemen.

The villagers on Tuesday called on security operatives to help them in dismantling the camp in order to prevent further attacks on their farmers.

According to them, the training camp is behind a rocky mountain near Riyom.

“We discovered their plans because one of the Fulani living with us was invited to join them in their training camp. That one deceived them by telling them he would go home and prepare to join them later; but refused to go back to the camp.

“So, it is our Fulani neighbour that revealed the secret to us, we have communicated to the police and security agencies in charge of this areas. But from all indication, they are afraid of going there, some of them even said we are raising false alarm.

“This gunmen can strike anytime and we don’t know where and when they will strike. That is why we are raising this alarm. If this planned attack is not prevented, we will hold the security agencies responsible for any loss of lives and properties because past attacks by these gunmen generated casualties as many as hundred,” A member of a vigilante group in Riyom Dangyang Bulus said.

A source said the Fulani gunmen might be members of the dreaded Boko Haram Jihadi sect.