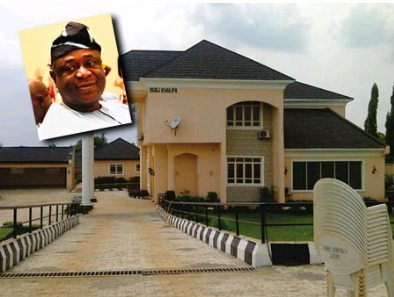 According to the elder of brother of Toyin Hamzat, a former special adviser to Fashola who was murdered in Sagamu over adultery at age 54, the deceased just completed a multi-million Naira mansion (house) in his hometown of Aiyepe, Ogun State. naijagists.com

71-year-old Alhaji Soga Hamzat, the senior brother of the Toyin spoke at length in an interview he granted in Ayepe, Ogun State,Nigeria yesterday.

Sir, how do you feel about the loss of your younger brother?
His death is like putting fire on the family’s body. It’s very painful and devastating. We only pray to God to help us in this trying period, to give us the courage to accept the loss because Toyin Hamzat has been a very amiable junior brother.

He’s very intelligent, social and he was a qualified pharmacist from the University of Lagos. After his B.pharm he had two Masters degrees, that is MBA and M.sc in Political Science.

What pains us most is that he had just put up this building (Burj Khalifa) in his hometown not quite two months ago and he had spent only a very short time living there. For us to lose him at this particular time, is an irreparable loss.

What would the family miss most about your late brother?
We are already missing so much, everything good for humanity about him. He was the Otun Baba Adinni of Aiyepe. He’s also Otunba Fibigboye of Aiyepe. So, what ever we did in Aiyepe, he was always there morally and financially. He was just given the chieftaincy title on October 1 and that was when he moved into this house.

As the head of the family, how was the relationship between you and him?
He was my confidant. I have only recovered slightly because today’s is the fourth day since he died. I have been crying since Sunday night because I was the first to be called and when I got there, and I saw his body and his car at OSUTH about 10:30pm on Sunday. You can imagine how I felt as his most senior brother. I am 71-year-old and he was 54.

We were born by the same father. So, you can see it’s a great loss to me.

How have his wife and children been coping since his death on Sunday?
His wife is a magistrate in Lagos State, Mrs. Funke Hamzat. It was a very big task for me to pilot her to Aiyepe when the incident occurred without telling her what had happened. It was when she got here that we broke the sad news to her. She has gone back to Lagos because people would be coming there to greet her. Even this morning Bola Tinubu was in their Lagos house. And that was why she was not here today to welcome the Ogun State Governor.

In our family, she’s like a daughter because she calls me Daddy.

So, how have the children been coping?
His children are still young. Only two or three of them are probably above 20.  One is in London, the first daughter is here followed by two boys. One is serving now in Ikeja Local Government, just graduated from the university.

And so that is the complexity of the problem we have inherited from somebody who was so close to every member of the family. He was a family man to the core. A very peaceful man; he never liked quarrel,he would rather walk away. He never liked arguments.

People have been trooping in here since Sunday but what can we do? He has gone; it’s an irreparable loss.