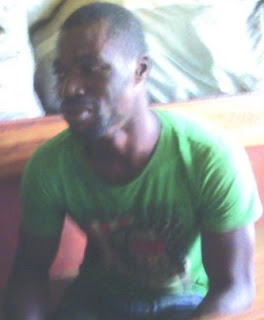 An accused, Rasheed Ademola, 26, who was arrested and charged to court for burglary and stealing has confessed that he cannot resist the temptation to steal.

The kleptomaniac was arraigned before the Ijeshatedo Magistrates’ Court, Lagos, southwest Nigeria, where he pleaded guilty to the offences.

Ademola told the court that he didn’t know what was wrong with him, adding that he tried in the past to resist stealing but that the more he tried, the more his desire to steal.

The secondary school dropout from Oyo State, told the court further that he lives with his mother at 18, Aje Street, Ilasamaja, Lagos, southwest Nigeria.

He confessed that he was influenced by his friend, Hope Ariyo, who lives with him in the same house.

He also told the court that he and Ariyo used to go out in the night and early morning to burgle people’s shops and steal their property.

He denied ever using arms or injured anybody in the course of his operations. He, however, admitted using tools to break the shops and doors of his victims.

The remorseful Ademola revealed that her mother tried her best to stop him from stealing, and that he also tried to stop but was unable to do so.

“My mom did all she could to stop me from stealing but all to no avail. He advised and prayed for me to change. She even took me to prayer houses but after all these, it gets worse,” he narrated.

He was arrested along with his accomplice after they broke into an auto shop at 7, Aje Street, Ilasamaja, Lagos and carted away spare parts worth N250,000, belonging to Chika Okpara, a spare parts dealer in the area.

While they were carting away the goods, they were caught by residents of the area and handed over to the police at Ilasa division. They were charged with burglary and stealing.

Ademola pleaded guilty to the two-count charge but his friend, Ariyo pleaded not guilty and started crying in the court.

Ariyo pleaded with the presiding magistrate, Mrs. A. Davis, to release him because he knew nothing about the matter.

Ademola was infuriated by Ariyo’s pretence and told him to shut up.

He told the court to ignore Ariyo’s crocodile tears of innocence because he is a thief who had gone to prison five times for criminal offences.

Ademola revealed in the court that he and Ariyo lived in the same house at 18, Aje Street, Ilasamaja and became friends when they discovered that both of them shared the same passion for stealing.

Ademola confessed further that they usually go out at night and early in the morning to burgle people’s shops and steal their property.

He challenged Ariyo to tell the court what he was doing outside their house while others were sleeping on the day he was arrested.

These revelations shocked Ariyo who later admitted before the court that he had gone to prison several times for  breaking the law.

After he was exposed in the court by Ademola,  Ariyo  stopped crying and raised his hand to change his plea to guilty but he was ignored by the presiding magistrate.

The matter was adjourned, while the accused were remanded in prison custody.

A Kleptomaniac is someone with an irrational urge to steal in the absence of an economic motive.

[culled from The News Lagos]