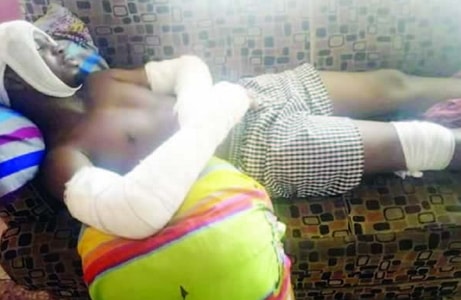 Oluwadara Adedayo, a second year  Material Science Engineering student at the Kwara State University  is battling with injuries after he allegedly jumped off the Cele-Okota Bridge in Lagos State.

Adedayo was allegedly chased to the bridge by some armed policemen attached to the Anti-Kidnapping Unit of the Lagos State Police Command.

We learnt that Adedayo, who was currently on Industrial Training in Lagos, was heading towards the Yaba area of the state last Monday when he was accosted by the operatives at Cele bus stop.

It was gathered that the cops, after stopping the 24-year-old, decided to check a mobile phone and a modem found on him.

He said the operatives thereafter ordered him into their bus, but he resisted the order as they did not tell him what his offence was.

Adedayo, who said nothing incriminating was found on him, explained that the policemen eventually bundled him into the bus.

“They ordered me to enter the bus they brought and I refused. I demanded to know what I did to warrant me entering their bus but they did not say anything, only for them to bundle me inside the bus.

“I saw an opportunity to escape from the bus and I did. I jumped out of the bus because of my past experience with policemen. A few months ago, some policemen accosted me at Durba (Lagos) and accused me of being an Internet fraudster without any evidence against me.

“They took me to First Avenue, FESTAC Town, and collected the only N2,000 on me before I was released. I suffered before I got home that day.”

Adedayo stated that once he jumped down from the bus, he crossed to the other side of the road and ran to the Cele-Okota Bridge.

The Kwara State indigene added that one of the cops chased him on a motorcycle.

“When I stopped. The policeman quickly parked his motorcycle and pointed his gun at me, threatening to shoot me. Out of fear, I jumped off the bridge.”

Adedayo, who noted that he became unconscious after landing, said the policeman and his colleagues immediately fled the scene.

He said some Good Samaritans took him to a private hospital, where he was rejected.

“I was then rushed to the General Hospital, Isolo, from where I was transferred to the National Orthopaedic Hospital, Igbobi.

“I have not reported the incident in any police station because have just been discharged from the hospital”.