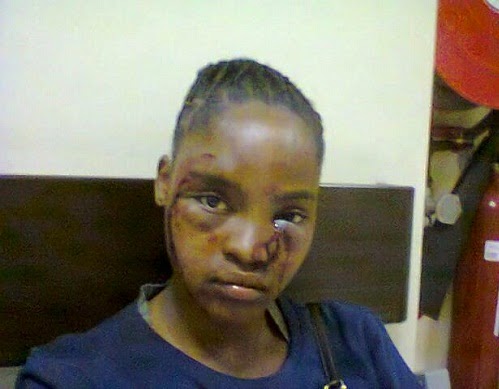 August 14, 2014 – Lady Beaten Badly By Her Boyfriend, Baby Father In Durban Exposes Him On Twitter

A lady identified as Lindiwe Manzi based in Durban has exposed her abusive boyfriend on Twitter.

Few hours ago, the mother of one shared a photo of her battered self on Twitter.

To crown it all, she says the man who turned her in to a ‘Zombie’ is the most romantic man alive.

“I don’t see myself being in a relationship
He made me lose interest in all men
I have so much to live for and so many goals to fulfil,I love life and living
For the sake of my life and most importantly my little angel,I have no intention of going back to him.
If I had the privilege of time I would respond to each and everyone but I’ve an exam next week
I have forgiven him but it is not my intention to go back to him 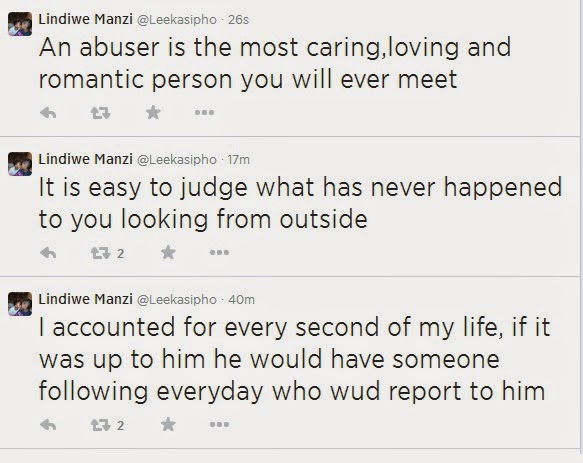 An abuser is the most caring,loving and romantic person you will ever meet
It is easy to judge what has never happened to you looking from outside
I accounted for every second of my life, if it was up to him he would have someone following everyday who wud report to him
By making the abuse public,I was not seeking attention,I just wanted to help others in the same situation,no one has a right to abuse you
He called used to cal mor thn 10 times a day and when I told to decrease da amount of times he col’d he wud say it means I don’t luv him
My father used to say too much of anything is not good, I learned the hard way
it was not a matter of seeking attention it was a matter of making people aware that things like these still happen
That is what my so called boyfriend did to me two days ago”

Chei! God ooooo this is too much. Why did this beautiful lady stay in this abusive relationship up till this moment. Na wa o.